From MobyGames's description of this zany action game based on the cult horror movie: "A truly bizarre game which was rather popular at the time. It's an action game of sorts, in which you play Beetlejuice himself and you have to kill (?) all kinds of skeletons with weapons -- you start with the ability to shoot a single loogie at the skeletons and, by collecting bonuses from destroyed skeletons, you may get additional loogies per shot or completely different weapons. Also, after you hit a skeleton, your friend Lidia has to collect the skeleton's remains with a vacuum cleaner; however, if a skeleton find Lidia she becomes imprisoned in a cage and you have to release her by hitting another skeleton and taking a "lightning bonus" from his remains. Another nice touch is the worm, which comes out of the playground every now and then and, should it hit you, kills you."

In short, Beetlejuice is a fun arcade game that is very repetitive, but strangely grows on you after a while. It's also notable for being one of better games from Hi-Tech Expressions, who's known for producing lackluster action titles based on cartoon and movie licenses. 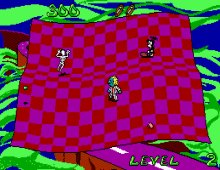