Battle Wrath is a lackluster one-on-one SVGA fighting game sold as shareware briefly in 1995 - the first fighting game to use SVGA. The thoroughly average plot goes as follows: after death, great warriors were granted new life. they are now locked in eternal competition, fighting each other to be declared the best of the best- ruler of the Battle Lords. Your job, of course, is to pick your champion and fight other Battle Lords to become the ruler.

The best thing about Battle Wrath is the somewhat inventive design of warriors. Historical, mythical, and futuristic fighters are represented here, each with his/her own special moves. The controls are easy to learn: you "charge up" your power and then press the appropriate keys to unleash the special moves. Some moves are documented and some are not, so players have to find them. One nice option is that you can adjust the game speed to fit your preference or machine speed. Graphics are ray-traced SVGA that is adequate, although the 2D/cardboard-cutout explosions look downright ugly.

When all is said and done, Battle Wrath is merely an "okay" fighting game that won't make fans of Mortal Kombat or similar beat 'em ups take a notice. The game is tougher than average, but the limited number of fighters, special moves, and arenas does not offer much replay value. The lack of features such as combo hits that have become standards in the genre is also disappointing, as it makes the game much more simplistic. Worth a look only if you collect this kind of games. 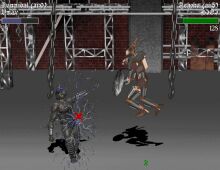