Battle Nation is a great fanmade game based on an arcade classic by Namco called Battle City, which is in turn based on Atari's Combat. The basic idea: control a tank to destroy all enemy tanks on each level (25, to be precise) to go to the next one. Enemy tanks appear one after another on screen, but there will never be more than 4 tanks in total at any time - true to the arcade original.

Battle Nation very faithfully recreates the fun of Namco's classic. You can collect 8 kinds of power-ups dropped by destroyed tanks, and take advantage of terrain features and obstacles on the level (e.g. hide behind bushes and brick walls, which you can destroy). The game even includes 3 different difficulty levels, so you can practice your skills on the easy level first. You can also play against another human player if you want to. The game looks nice, plays great, and is an all-around solid remake. It's not as addictive as some PC remakes of Atari's Combat (Tankkk and Tankgame come to mind), but it is still a lot of fun. 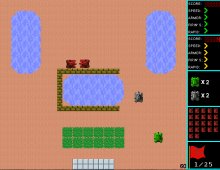