I used to play this for hours and hours on my Amiga - preferrably in two-player-mode. Using the wellknown Asteroids-concept this is a greatly enhanced version. You can transform your ship into 3 different types - Fighter (strong fire-power), Speeder (fastest ship) and Warrior (heavy armor). You find various extra weapons and fight in different sections with different enemies and asteroids to destroy. In the end you fly against Mukor - a green Space-Monster. The graphics are marvellous if you think of the time this one was made - just compare it to other games from 1987! In my opinion this is the best you can make from the Asteroids-idea.

Less-than-average conversion of Atari's arcade game Blasteroids, which hit the arcades in 1987. Ok, compared to the excellent arcade game this PC version looks and plays like a bad joke. ;) The object of the game is to shoot all the asteroids and enemy ships. Complete the required number of levels, and you will face a giant guardian that you can only kill by shooting off all its body parts.

The asteroids come in different colors and some have to be shot many time before they break up into smaller pieces and finally disintegrate. You can switch between 3 different ships, each with its own strengths and weaknessess, usually involving tradeoffs between speed and firepower. You can always choose between the 3 ships to suit your needs. Some asteroids when shot at will release powerup icons, which typically give you either more firepower or shields. A nice touch to this game is that 2 players can play at the same time on the screen (i.e. hotseat mode). This works well and adds a little to an otherwise average game.

In conclusion, Blateroids is a very average game. It doesn't really add anything to the Asteroids-clones genre and doesn't even come close to the original in terms of addictiveness and playability. But hey, who expects a perfect arcade conversion from a game made in 1990? So, just pretend you never played the original, and you'll have some fun with this Asteroids clone with some neat features. 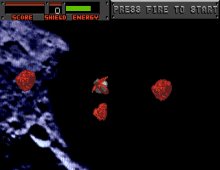