Defender is Atari's excellent PC port of Williams' arcade hit - one of the most successful of all time designed by legendary Eugene Jarvis. Your mission, as captain of the "Defender" ship, is to protect the humanoids stranded on the planet from their alien abductors. The scanner will help you determine a strategy to shoot down the alien ships before they reach the humanoids. If you destroy the aliens after they have captured their prey, you must return the humanoids to the safety of the planet or they will fall to their death. If an alien carries its victim out of your range, the humanoid will mutate, join the alien force, and take to assault with deadly vengeance.

Like the arcade version, the beauty of Defender PC is that challenge becomes ever more intense the more you play. You'll come across new, tougher enemies such as bombers, mines, and the cosmic "Baiter." The range of power-ups is also innovative for their time: you have a limited "smart bomb" power, and "hyperspace" puts you into an unknown space warp.

Defender is truly one of the timeless classics that is no less fun no matter how many times you have played it. A must-have. If you like this game, also check out the less-known sequel called Stargate on this site. 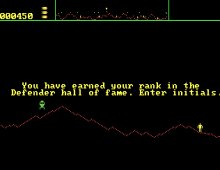