Battle Europe is a fun isometric shooting game set in World War II. Your objective: as either Allies or Axis, destroy all tanks of the opposing side on each level to advance to the next. In each level, you control only one tank as it moves through attractive tile-based VGA terrain to find enemy tanks. A radar on the top right corner of the screen shows you where the enemy tanks are, although there are surprises that make the game more challenging. Some strategy is required in the game in that your tank can not survive head-on enemy fire from multiple tanks, so stealth, speed, and some tactic (such as "luring" enemy tank into your line of fire one by one) are critical.

Playing the game is very enjoyable, especially since you never face overwhelming odds, and non-action elements are required for success. The only gripe I have with the game is the unconventional control scheme that takes some getting used to: arrow keys are used to make the tank move in absolute directions (e.g. UP = north, LEFT = west), not relational directions as most other games in the genre. Despite very simplistic (and some would say primitive) gameplay, Battle Europe has the charm of popular coin-op arcade games and the same "just one more level" addictiveness that will pleasantly surprise die-hard gamers, most of whom probably have never heard of this obscure old game. Using World War II as setting for arcade-style action also makes the game quite unique in its genre. Highly recommended! 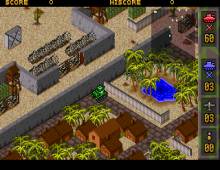