18th Airborne is a fun and hugely underrated (and unknown) action/strategy game from Taiwanese developer Spectrum Information. Although it looks like a typical top-down two-player frag fest, 18th Airborne is very different from your ordinary shooter. Gameplay in a nutshell: fly your plane around to first get fuel from your home base, then bomb and take over your opponent's bases. The objective is to get as many bases as you can, and make your way down to your opponent to kill him. You can call up a map of the level at any time to see which bases are left and where your opponent is. There are 7 levels in all, each with its own terrain and layout.

It takes time to figure out what to do and how to control the plane, but once you do, the game becomes a lot of fun. Anyone who likes Return Fire or any other split-screen multiplayer games will definitely enjoy this old game. 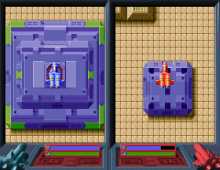