The character animation is simply excellent in this game and you didn't see any other games with the same high quality in this period. Even some of today's games don't have the same high quail as Prince of Persia has. The game is divided up into different levels and on your way through each level you have to avoid different traps, some more difficult than others, and also enemy fighters that you have to fight against with your sword. Most of them are fairly but there are certain ones that can cause quite some problems. The traps you will meet on your way can be everything from spikes, loose floors and different machine-like traps.

This version of Prince of Persia is a must game for all fans of the original game and also series in general. The reason is that while it does offer a lot from the original game many new things are included and is a great challenge to anyone. Good detailed, but simple, graphics are included while the little sound could have been better, especially because only very little has been made for the game. A recommended game for everyone but if you have the chance I recommend you play the original version of Prince of Persia first.

4D Prince of Persia is a solid unofficial version of Jordan Mechner's classic action/adventure that starts off the same as the original version but will stump even action veterans with devious level design and tougher enemies in the later stages. For the uninitiated: Prince of Persia was a smash hit when it was released in 1990, and is today still regarded as one of the best games ever made. The combination of fluid, lifelike animations, great Arabian-Night storyline, and devious physical traps and puzzles made it a revolutionary game for the time, and very challenging even to expert gamers. The tortuous difficulty level of this fanmade version makes it a perfect game for those who finished the original game and are looking for a real challenge to save the princess :)

But it's not the same game. It uses the exact same pictures and gameplay as Prince of Persia 1 and I think you could see this one as some kind of level expansion. I'm not even sure if you could call it a sequel, because it's so similar.

"So what's Prince of Persia about?", You will ask. Well, it seems to me that you ought to know that, but as you appear not to, I will tell you! In Prince of Persia you're a prince who has lost his girlfriend. Well, actually, she's been kidnapped and hidden in a big "fortress". Your mission is to save her. There are persian guards to block your way and you will have to fight them with your sword. You've got exactly 60 minutes to save her and no options to save your game. Every level actually is a level up inside the fortress.

All by all, the original caught me playing for quite a few hours, with good graphics, a very nice sound setup and good gameplay and I recommend it to you. 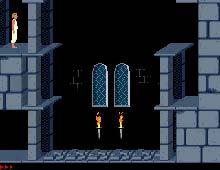