Not much can be said about this game, really. It is a two-player battle to the finish with hamsters. There are no endings, no other backgrounds besides the one pictured, and only one character (the other shown is just a recolor). One repetitive song is all there is for background music. A few cheesy sound effects make up the voice portion of the game. Special moves are few in number and only involve holding the down key and pressing an attack button. The only thing this game is really good for is its cuteness. If you like 'cutesy' fighting games, this one's for you. Otherwise, I recommend you keep looking. 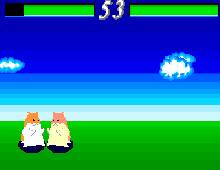