Billed as a "flight sim," Banzai Bug is actually a 3D action game, although the premise is indeed unique: you fly a bug named Banzai on a quest to drive the bug-phobic humans out of the house. Your task is complicated by various traps set by a devious human exterminator hired by the owner to rid the house of your kind. Think of Maxis' SimAnt, except as an action game, and you will have a good idea on what it's about.

Banzai Bug is a lot of fun for the first few missions. You will be impressde by crisp 3D graphics and decent regard to real-world 'bug physics.' There are three modes of flight for Banzai: Plane Mode, Helicopter Mode, and Look Around Mode. Plane Mode is regular flight mode and is most similar to a typical flight simulator: you fly around the room, shooting and strafing enemies. Helicopter Mode allows you to hover and move vertically for precise maneuvers. Look Around Mode allows you to look around without actually moving from your current location. Each of these modes is activated by a different button. The controls are easy to learn, allowing you to start buzzing around the world in no time.

After the novelty wears off, though, the game quickly becomes competitive: there are too few "rooms" to fly around in, and each room has repetitive goals that do not vary in substance (get X matches, find X pieces of food, etc.). Also, Banzai only has a few weapons at his disposal to deal with the many enemies he encounters, none of which is particularly interesting. Overall, Banzai Bug may appeal to kids who are starting to play 3D action games and enjoy the colorful eyecandy. The repetitive gameplay will likely bore even the most tolerant kid in your house, though. Too bad the unique concept is not backed up with sufficient gameplay in this one. 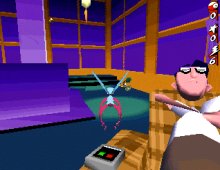