Abu Simbel Profanation Deluxe is a superb fanmade remake of Dinamic's classic platformer for the Spectrum computer. You are Johnny Jones, avid adventurer who explores a forbidden Egyptian temple (perhaps inspired by a certain famous relative...) Your goal: reach the mortuary inside the temple and get rid of the powerful curse of Ramses II. Johnny Jones for some reason is a purple blob with eyes and legs, but his lack of hands is no obstacle in a game where only jumping and dodging are required to win.

Which is not to say ASPD is an easy game. On the contrary, it is extremely difficult - even more difficult than the last few levels of Pitfall: A Mayan Adventure. Pixel-perfect dexterity is required in many places, especially to dodge vicious drops of acid. I died numerous times in the game, although it does have that rare "just one more try" pull. Crisp, colorful graphics and smooth animations help bring the fun of this underrated Spanish gem to a whole new generation of PC gamers. But given the high difficulty, it will take you quite some time to get through the 45 screens. Highly recommended, but let the newbies be wary :) 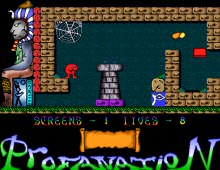