Arena Runner is another quality freeware action game from the talented Apocalyptic Coders group. Circy's review for Klik-Me.com says it all:

" I guess, in a couple of ways, Arena Runner perhaps resembles a Snake game. You "activate" pills lying on the floors of each arena. Nab them all and you go to the next level. However, things are more complicated. Firstly, AR is a much pacier game than the aforementioned favourite mobile phone game. Secondly, you don't gain any extra body parts when a pill has been activated. And thirdly... well... they say that variety is the spice of life.

There is always so much going on in Arena Runner. You didn't really think that just collecting pills would be the challenge, right? Various obstacles and enemies make the going pretty difficult. For a start, there is a gun turret on each of the four main walls of each arena, and shoot at you when you're in their line of sight. Avoiding these can be extremely challenging in later levels, which are much more compact and less comfortable than you might think. In addition to these, there are ice tiles. If you've played the game Chip's Challenge, then the ice tiles play a similar role, in that once you stand on one, you're pushed forward in the direction you're facing, but you can't change direction until you're back on "normal" land... and of course, mines litter later arenas.

The graphics in Arena Runner are fairly good, although I can't see any animation - save for the moving background - at all. The main ship is sprited nicely, while the entire game sports an almost "Matrix" look, with neon green effects. The backgrounds are much more basic, though, than the main sprites, but for some reason this gives the entire game a crisp, clean look.

Audiowise, well, there's some nice music by Twilight Terror. It follows the similar "chip" style as seen in all his other tunes. However, they can get a bit repetitive. They will flow into your head until you can only take so much. Then they begin to sound like a pneumatic driller. Sound effects are fairly minimalistic. The gun turrets shoot at you, you explode, the collection of pills - all these activate the most basic of sound effects. Still, with a game of this type, they're not a big issue.

It's a case of love or hate with this type of gameplay. As Arena Runner can get VERY hard in later levels, it's just a matter of whether you feel you can beat the level you're on, or press ALT and F4 in disgust. But there's no doubt about it - the game is pretty addictive until you reach that level... and to further enhance that addiction is the inclusion of an online high score system. You won't be making the top ten for a long time, I don't think, until you actually get good at the game.

If there is any nitpicking, I'd go as far to say that, like the music, Arena Runner can get very repetitive. There's a large twenty five levels to beat, and you may get sick and tired of the risk/reward factor - ie, a laserbeam is heading in your direction, but you can just get that final pill - only to be decimated by said laserbeam. This leads to frustration and can get quite unrewarding. Still, what we have here is a very solid game. The engine is smooth, fast and responsive and the game looks quite nice. If you like the challenge, then Arena Runner is worth downloading - but it won't be for everyone." 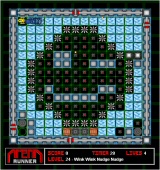