Ant Attack PC is a faithful recreation of Sandy White's excellent Ant Attack, the world's first isometric 3D game published by Quicksilva in 1983 for the Spectrum computer. The idea of the game is to enter the Walled City of Antescher (which "...has rested for a thousand years in the midst of the Great Desert inhabited only by the deadly ants who have made it their home"), and rescue your girlfriend - or boyfriend, since the game actually asks what sex you want to be (one of the first action games in my memory that do this). The only difference between the two sexes is the appearance, but it's still a nice touch.

The gameplay is very simple: you run around the playing field, jump over obstacles, and climb walls or stairs, attacking giant ants by throwing grenades on your way to finding girlfriend/boyfriend. You can also stomp on ants multiple times to paralyze them. Up to five ants attack at one time, but others will appear to replace the inactive ones. You can stand being bitten quite a bit, but too many bites will eventually result in death. You can also switch camera angle, useful for when your character disappear behind a building.

Although by no means a "deep" game, the original Ant Attack was a milestone in computer graphics, and is a fun arcade game to boot. This PC version does it justice, but keep an eye on the author's website for the upcoming graphically enhanced version for Windows. 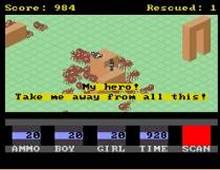