To put across how much this game scares me, I really should gibber uncontrollably for most of this review. If this image entices you, read on. Arguably the best game on the Sinclair ZX81 computer (the big brother of ZX Spectrum), 3D Monster Maze is pretty unique, even in its story. Have you ever wanted to go to a circus and have a clown offer a once-in-a-lifetime time-travelling experience to you? And for that experience to involve being chased around a maze by a Tyrannosaurus Rex, never able to escape?

That scenario wouldn't be fun unless it was a computer game now, would it? And thankfully 3D Monster Maze is just that, a computer game. With terrible monochrome low-res first-person graphics and no sound. Yet it's probably the scariest game you'll ever play, and fun in a slightly sweaty, heart-thumping way.

With only vague clues to guide you - things like "Rex lies in wait", "He is hunting for you", "Footsteps approaching" and "RUN! He is behind you!", the surprise when a huge mouth swoops out from the side and gobbles you is jarringly shocking. Even when he comes up from in front of you, low-res Rex is still quite scary. As he gets closer, he is recognisably large, lizardy, and toothsome. And he's gonna eat ya!, a primal fear this game exploits to the full.

With terrible graphics, no sound, and slightly unresponsive controls, 3D Monster Maze is still far more suspenseful than modern 3D shooters. With no form of defense, the Rex is unbeatable. You can only win short respite by finding the exit from the level, which is always down a cul-de-sac, and viewable from 5 spaces away. Look hard for it.

And remember, on the next level, Rex is looking harder for you. 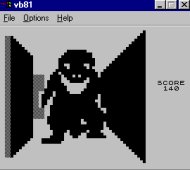