ABM Command is one of the numerous clones of classic arcade game Missile Command, but this is one of the more faithful ones, with the familiar gray towns and green laser streaks across the sky. If you don't know what Missile Command is like (and chances are the only reason is that you are born after 1985 or so *EG*), the concept is very simple: you control three ground-based missile bases, each of which can shoot a certain number of missiles in each round. Your job is to protect six cities from certain destruction from incoming laser fire, which appears at random from the sky. There's a catch, though: your warheads can only destroy the *tip* of these laser, not anywhere else, and warheads that comes into contact with laser tip will set off a circular explosion, which can destroy nearby laser that comes into the radius. With a limited number of missiles in each round, this means that timing and planning are crucial in the game -- you have to plan to destroy 4-5 or more incoming fire at once on higher levels. With a simple yet addictive gameplay, ABM Command keeps the memories of Missile Command alive, and helps prove that great games don't have to be CD-ROM extravaganza. Must-have! 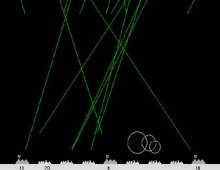