One of the best fanmade, and most obscure, AGI games ever made, URI Quest (short for University of Rhode Island Quest) is a fun game by Jeff Carroll that chronicles his life as an URI undergraduate. The game consists of four chapters, each starring Jeff or one of his roommates: Ed, John, and Ziggy, as they explore the URI campus looking for ... well, you'll have to find out for yourself :)

A bit of an intro is in order for those who don't know what AGI stands for. Basically, it's the game engine behind Sierra's classic 16-color EGA games in the 1980s, including Police Quest 1, King's Quest 3, Leisure Suit Larry 1, and many more. In late 90s, a die-hard Sierra fan named Peter Kelly succeeded in making AGI Studios, a versatile program that allows anyone to program an AGI game. The rest, as they said, is history.

As a development tool, AGI Studios pales in recent years with the advent of newer programs (such as Adventure Game Studios), and most AGI games that were in development became abandoned. URI Quest is much less known than Fuck Quest, which is perhaps the most famous fanmade AGI game of all time, but it's a vastly superior game. You start out as Jeff in his dorm room, and your first task is to-- find his missing pants (!). From this sophomoric opening, the game develops into quite an enjoyable college romp, full of girls, booze, party, books, and all the things commonly associated with undergrad life. The puzzles are logical, if a bit on the easy side, and the descriptions are mostly adequate.

Although I did find the game enjoyable enough to play it to the end, I do have two major gripes. Firstly, the game's parser could be more intelligent. For instance, the game will ask you "Which desk? There are two" when you type OPEN DESK, even though you are clearly standing right in front of the left desk. Since many rooms in the game have 2 of most objects (beds, closets, desks, doors, etc.-- hey, these are typical college rooms that house 2 people), it's quite a nuisance to type OPEN LEFT CLOSET or LOOK TOP BED all the time. Also, the gameworld is *huge*. There are dozens of screens that are just fodder to make the game seem bigger-- you can't interact with anything in them. Fortunately, you start the game with a map in your inventory, so finding your way around the huge campus is not impossible.

Overall, I quite enjoyed URI Quest. Although sometimes it's not clear what has to be done next, looking at your character's schedule usually will point you in the right direction. With good graphics (by AGI standards, of course) and solid gameplay, URI Quest may just make loyal Sierra fans all misty-eyed with the glory of AGI again. 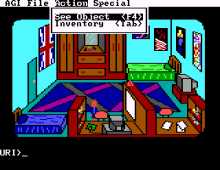