Shannara is a great adventure game made by the same people as the popular series from Sierra, Quest for Glory. The story is taken from the novel with the same title so if you have read this one you will have a great advantage compared to people that haven't read it once the game starts.

The game has the same great graphics as games like Monkey Island the later games in the Sierra adventure series like Quest for Glory and King's Quest so you can't complain there. As mentioned earlier the game is based a lot on the original novel and therefore the puzzles in the game is also affected by this and that is why you most likely will be able to solve them faster if you know the story. If you don't know it they are still not that hard but hard enough to give you a good challenge.

Quest for Glory creators Corey & Lori Cole to work on a game based on Terry Brook's best-selling fantasy novels was a match made in heaven. You are Jak Ohmsford, son of Shea (the novels' hero), who must seek the sword of Shannara to vanquish evil warlock Brona. Puzzles are easy but fair, with the best ones being those that require help from your teammates. Gripping story and puzzles will keep you playing to the very end. Highly recommended, but be warned: puzzles closely follow the novel's storyline, so if you have read the books, you'll likely find the game far too easy. Overall, one of the best fantasy adventure games ever made, despite a predictable plot. 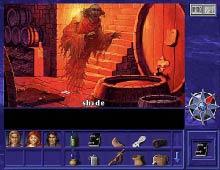