Quest for Glory 3: Wages of War

In the new episode to the series, the hero comes back from Quest For Glory 2 to the magical city of Tarna, inhabited by the fierce Lionataurs. What happens, is that he is transported to Tarna by a magical wizard, and that wizard tells him that he must save the land. So you kinda have to be a UN peacekeeper/hero and try to stop a massively-destructive war. Well, maybe not a UN peacekeeper, but close to one. If anyone remembers Rakeesh from QFG2, the wizard who transports you to Tarna is his wife. Tarna is a "big city", however its just a couple of screens long. Maybe 5 or 6. The musical score is sicking. Arrg. There are only 2 or 3 good songs out of the whole game that actually sound good. The intro music is just a bunch of crap drums that don't even play good beats. However, the sound is above par, and when you cast the bolt spell and your speakers are really loud, they sound like genuine thunder under the general MIDI setting. Try it. (Sorry, I just had to add that in there). Ahem, anyways, the graphics are really good for its time, and I think they are great compared to other old games. You can also still import your character, and the skills are better planned out. Hmm...what else...oh yeah! The gameplay! Whoops, almost forgot. Ok, the gameplay is a two-sided mask. Excellent plot, trying to stop a war against 2 races. However there are no more forests that you navigate on, which is disappointing. All you do is click on a part of a large map and your character will walk there, randomly encountering enemies. Another thing that's crappy is the fighting. What's bad about it, is unless you use turbo or moslo, its gonna be very fast. And, that "thrill" from the other episodes is not there. All you do it just click the hell out of a monster, until the thing croaks over. However, that not too bad. What's bad is some of the minor bugs. One time, I was walking down the busy streets of Tarna, when by character all of a sudden skidded across the screen. What the hell!? Another time, I was in a contest later in the game, and as soon as I played the contest, my game would just lock up and give me some "Unexpected Error" message. And what's crappy is the patch does not fix this! Oh well, its manageable anyways. The ending is very good, and very satisfying this time around. Also, there is a certain part in the game where you fall in love and kiss some girl, and get "married" to her. (BTW what the heck happens to her, anyways?) Unfortunately our hero is a jerk and never sees the girl again. Oh well, that's just part of the wacky plot. There are some fun "mini games" that you will spend time on, such as spear throwing, playing some board game with some kid, and another thing where you have to do moves on a balance beam. I have mixed feelings about Quest For Glory 3. I feel it is a good addition to the series, however I believe it does have some slight problems. Look, I am not trying to be a used-car salesman, and I am not trying to sell you anything, I am just trying to tell you that you will probably like the game. If you've played the previous games, (which I suggest you do) You might find this game interesting. However, if you are new to the series, start at Quest For Glory 1. All in all, a above decent game, very much well worth playing.

Quest for Glory 3: Wages of War is yet another title in Sierra On-Line's popular Quest for Glory series. It was released in the early nineties and is a role playing game and adventure hybrid with medieval or fantasy themes. The entire game is two-dimensional and plays from the third person perspective. It follows Quest for Glory 2: Trial by Fire very closely.

In this installment of the Quest for Glory series, the user has questions always in the back of his mind. In the previous game, the user defeated Ad Avis, but the beginning of Wages of War hints that he was not destroyed. It also hints at the location of your arch rival, but it does not seem to go any further. Instead, that part of the plot is reserved for Quest for Glory IV. Instead, the hero in this game is faced with the problems of a war-torn jungle and savannah environment, similar to Africa. Two rival tribes are about to wage war against each other, likely destroying the ecosystem in the process. Each tribe has a relic sacred to the other, and neither of the stubborn factions will budge as far as making a truce and returning the items. The goal of the user's character is to prevent war, unite the tribes, and lead the new allies against a greater evil.

When beginning the game, the user can import characters from previous Quest for Glory games, or start fresh with a new character. The user must determine his occupation, either Thief, Wizard or Fighter. The choice of occupation directly effects how many of the puzzles will be solved, since each class has access to different skills. Like a role playing game, the user's statistics will raise as he completes quests, fights battles and solves puzzles. The user will have to run all over the world and interact with many nonplaying characters who may have clues or inventory items available to help the character solve the puzzles and unite the Uhura and the Leopardmen. In this aspect, Quest for Glory III is very much like an adventure game. Like an adventure game, there is a little bit of pixel hunting, but the improved graphic display removes most of the frustration from this task.

Overall, Quest for Glory 3: Wages of War slides nicely into the series and is a good gaming combination. There are numerous puzzles, some interesting tasks, and an overall good adventure to be had here. The ability to import characters is always fun, and the battle sequences have been much improved, especially for a fighter that is brought into the game. This is a nice little play and should provide a satisfying challenge to adventure gamers and RPGamers alike. 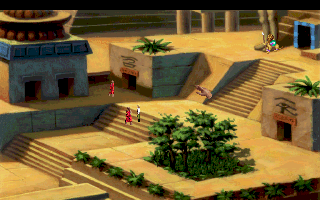