Quest for Glory 2: Trial by Fire

So you've past Quest For Glory 1, and proven your hero's worth. Big deal. Now your character has bigger problems to deal with. Evil satanic Wizards. Huge-ass monsters. Scorching Desert Heat. Problematic Elementals. Time to get your character ready, so he can save the day. Again. Only this time, its harder, and you better be prepared. The game starts off by you flying on a magic carpet with your Katta friends. (some of you may remember them from the inn in Quest For Glory 1) Katta are cat-like creatures, who are very fond of humans. They bring you to their city, as they need a hero there. There is a prophecy which tells of an evil wizard who wants to unleash mass destruction and rule the world with death and chaos. You, being the hero, are forced to accept the mission to stop this, and restore order to the city. Or should I say, cities. Quest for Glory 2 is bigger and better this time around, and there are two cities you can go to. That's way more than Quest For Glory 1. Another thing I found improved with the game, were the size of the cities. You can actually get lost, because there are so many alleys and secret shortcuts. There are also 3 guilds you can join, which are the WIT (wizard's guild) the EOF (fighters guild) and the thieves guild. Each guild is hidden in the various dark corners of the city, so make sure you try to find some clues when you play the game. The fights are better planned, making them look more RPGish, and a little more fun. I also like how there are much more monsters lurking around, which make the game more enjoyable, and more challenging. If you like the "Arabian Nights" setting, you will love qfg2. The deserts are very, very huge, and almost impossible to cross unless you have a lot of rations. Also, make sure you buy a Saurus to ride on, as walking by feet is literally suicide. Yes, you actually get to own your own "camel" this time, however in this game its called a Saurus. The musical scores are about the same, with new catchy tunes. The skills are better now, and even include different ones. The skills vary from character to character, depending on who you choose. The plot is also good, and its pretty satisfying at the end when you complete your quest. Baba Yaga from Quest For Glory 1 is taking a vacation, however, and the story differs from old hags to Arabian sorcerers. The characters in Qfg2 are very memorable, and very original. There are so many things improved from the original, I am just endlessly listing them here. So, if you are a fan of Quest For Glory I or, your just an RPGer or adventurer who is looking for a change download this game! Then you will see why this part of the series is my favorite!! Just download the game!!!!!!!

In the fictional world of Glorania in the land of Shapier has decided to be the next place for the Quest for Glory series to take place. Trial by Fire has been the one game out of all the games apart of this series to not have any Erana influence apart of the game play. As the player you have the ability to request being sponsored by Erana, but soon learn that it will be not possible since Erana hasn't been around for many years.

For this series the games will lead off from where the previous game ended allowing players to continue their adventures. The city of Shapeir has been bombarded by elements of magic so you must travel to this town to assist them. Also Raseir the city neighboring Shapeir ruler has been misplaced. Soon you will discover that this town has become under tyranny and you must find the ruler before its too late.

The city of Shapeir has been threatened by a total of four different elementals. One you have defeated these elementals you will continue on your way to Shapeir neighbouring city Raseir and attempting helping out around the city to get things straightened out. When you reach the city you will soon be imprisoned and then become hypnotized. When this occurs the evil wizard was trying to resurrect Iblis who is the evil genie. Once you come out of your hypnosis you will battle against the palace and defeat the wizard. When this has been completed you will see the evil wizard wanting assistance from his Dark Master.

As you've completed the game you have become highly respected around the town of Raseir and soon be adopted into the family of the Sultan of Shapeir. Of course there is a happy ending to a complicated game.

For the format of Quest for Glory II: Trial of Fire you will be given a thirty-day frame of time. This will give you a certain amount of time and the game will end in the same length of time. Throughout the game you will have to solve many puzzles that will be placed upon your screen during certain days of the thirty-day period. 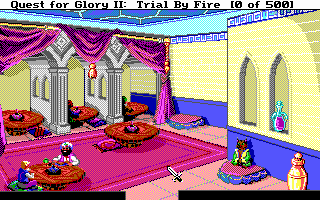