Hero's Quest (aka Quest for Glory I)

Have you ever wanted to helplessly defend yourself against an ambush of treacherous brigands, or escape the wrath of a hoard of goblins? Yes? Well then today's your lucky day! You've got Quest For Glory! In Quest For Glory you're an average hero who just got out of "Hero School". You come to the land of Speilburg to seek glory and fortune. However, its gonna be a lot tougher than you think. The Baron's daughter and son have mysteriously disappeared, and no one knows what happened. Also, an Evil Ogre named Baba Yaga has put an evil curse on the valley, and all is not safe. On top of that, (yes, Spielburg is screwed up) greedy Brigands are terrorizing anything that moves through the forest and stealing everyone's hard earned dough! If you think plot is the only thing Quest For Glory has, your wrong. Gameplay is extremely good. Instead of your average crappy "One-time play, Sierra adventure game" Quest for Glory is also a RPG. Since its so well made, you will want to be coming back for more, and trying out all the classes again and again. You will get to choose three different Character Classes at the beginning of the game, and you will also get to choose their skills. The characters are: Thief - My personal choice. Extremely stealthy and can deceive anything or anyone, if his skills are high enough. You can also use throwing knifes, which do a lot of damage. However, he is not too good at fighting close to close combat. Note: (You can rob people and houses too!) Also, make sure you join the Thieves guild' right away, as you will need the money from the items you steal. Magic user - Very skilled in far-away combat. Usually tends to weaken a monster with spells before he goes for the kill. Always make sure you buy enough potions from the healer's hut, because Stamina and Mana goes quickly with spells. Spells are also an important thing to buy/learn. Fighter - This is well, the most basic character. Usually no spells, (unless you give him that skill) Very good at combat, can break things down. This is the complete opposite of the thief. Strong, yet weak in acrobatics, stealth, etc... I usually like to make my own characters by mixing up their skills. For example, I usually make a thief, with spell points, and more strength to buff him up. I call him my "Buffed-up thief" and I have been playing with him all through the series, as you can import your character into each QFG game, and work on his skills. Its little things like that, that make Quest For glory and the series what they are. The musical score is also very good, with catchy tunes that you can't stop humming or whistling. And action and serious RPGers will like the battles all together, as they are very detailed and very fast paced. No turned based combat, just realistic fights. If you stop to think what your next move will be, the next 5 seconds you will end up on the ground, dead. The town is extremely good when its the middle of the night, and you have no place to go. Go to the tavern, and drink all night, or try to just get a good night's sleep at the inn. Usually you will want to stay in town at night, as zombies patrol the woods. Quest For Glory responds to your every move. Lets say you didn't sleep last night, the next day your fighting will not be too good, as you are very tired. Or, lets say you ate your last ration 3 days ago, and you are starving. You very well as might die, from starvation, or die because a monster took advantage of you while you were weak. Its kind of like one of those digital animal things, just not as gay as that. Undoubtedly in my opinion the best series made, I have no regret about playing Quest For Glory. The reason? Its original, its addictive, and, well...its just fun! Just download the game!! You won't regret it, whether your an adventure gamer, or a RPGer!

Sierra released plenty of graphic adventure and Quest for glory was an odd one out of the pack because it incorperated RPG elements like improving skills and letting you choose out of three characters namely a mage, fighter or a thief. Each of the three classes changes the way puzzles have to be solved and combat as well.

You start the game by choosing a character and deviding statistic points for things like luck, weapons use and dodge among others. In your home town there were pamflets asking for a hero in Spielburg valley and the fact that no experience was necessary was a big plus for you. After being welcomed by the sheriff you can visit various places in town as well as the guilds where you can see about job offers. You also need to talk with various town folk to find out why exactly a hero is required as that is something that is not clear to you yet but in your travels you will meet a lot of weird and wonderfull characters.

After hanging around town you should buy some equipment that will help you in your adventures and you can go outside of town to start battling some creatures to increase your skill. There are random encounters with various creatures like goblins apart from the rogues and brigands hiding in the forest. Fighting is usually seen in a 3rd person view and you can control your character with the keypad or type in spells to cast. This is a necessity as you will need to improve your skills to solve the puzzles and complete tasks if you are to be named hero of Spielberg. One other thing that you have to keep track of is time as the game has several different time periods and at night for instance the town closes it's gates and more monsters pop out of the forest. You will need to rest to fill up lost health but unless you find a safe place you might lose your belongings or even worse your life!

Quest for glory, originally named hero's quest, stands out from the other Sierra adventures because of the RPG elements included. This also gives the game some real replayability because although each of the three characters have the same goal the manner in which they reach it is quite different. The thief in particular is a favorite among many as you can do stuff that a hero is not supposed to do like burglary and pickpocketing. Technically the game uses the same engine as other Sierra adventure with a text based interface, EGA graphics and support for various soundcards. As it stands this series is definately among the best that Sierra had to offer and it has a fair following to this day so if you haven't seen the game yet I suggest you check it out. 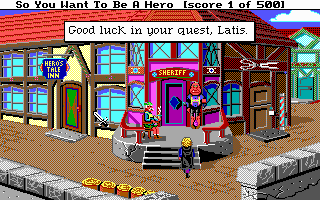 Hero's Quest (aka Quest for Glory I) screenshot