Peasant's Quest is a humorous, hugely entertaining 2D adventure that plays like Sierra's classic King's Quest games. Here is the official plot: "A real long time ago, in the peasant kingdom of Peasantry, some people lived... in fear. You are Rather Dashing, (a peasant wearing short pants) who returns from a vacation to find his thatched cottage.....BURNINATED! You set out on a quest to get revenge on Trogdor once and for all. So will he make it, staying alive, and protecting this peasant kingdom from burnination? YOU decide!!!"

The game was clearly designed as a parody of Sierra's King's Quest games, and there is plenty of jokes to put a smile on your face. It not only looks like an early King's Quest title, but it also plays like one (although to its credit, the puzzles are far better.... in a weird, warped-logic way). You type commands like TALK MAN or LOOK ROCK on the text parser at the bottom of the screen, while moving your protagonist around with the arrow keys. Although the game is rather short, it does feature more than a handful of clever puzzles (including some that are quite cruel but funny in a black-humor way), and a pretty good parser that was coded from the ground up in Macromedia's Flash. You can also save your game in progress (browser cookies must be enabled), see where you are on the in-game map (once you find it), and read funny descriptions of inventory items. Memorable characters, fun puzzles, and solid coding make Peasant's Quest one of the best freeware adventure games in recent years, its short length - I finished the game in about 45 minutes - notwithstanding. 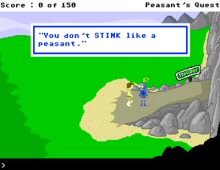