Space Quest 0: Replicated is an excellent fanmade Space Quest game that in my humble opinion is even more fun than The Lost Chapter, another fanmade SQ game reviewed on this site a few years ago. Set in a time before all SQ games (hence the name Space Quest 0), Replicated finds our hero Roger Wilco posted aboard Labion Orbital Station 10, a Class 3 Cloning Facility in space. Similar to Space Quest 1, Roger wakes up from one of his now-famous supply closet naps to find all of his crewmates murdered by someone... or something. Your job, naturally, is to help Roger escape the station and visit Labion to find out what happened.

The game uses Sierra's AGI interpreter, so the feel and gameplay are identical to Space Quest 1 and 2: type in simple sentences like TAKE CARD and OPEN DOOR to interact with the game. Pressing TAB brings up your inventory, and F4 allows a close look at inventory items. The graphics is not as detailed as The Lost Chapter, but as we don't fondly recall early SQ games because of graphics anyway, that is not important. Suffice it to say that the game's graphics is up to par with what Sierra achieved in its 16-color AGI games, and fans of the SQ series will find nothing out of place or amateurish. The parser is also up to par with Sierra's AGI games, and the plot is engaging.

What makes Space Quest 0 much better than your average amateur games is the variety of puzzles, none of which particularly difficult, but all are logical and fun to solve. In contrast to the official SQ games, you will even have a chance to combine inventory items to make new ones several times in the game. While Replicated is not as long as Space Quest 2, it is no less fun to play. All in all, if you are a Space Quest fan (and if you play adventure games, there's a 99% chance of that), you simply must check out this excellent fan game that remains not only faithful to the spirit of Sierra's classic, but also adds a whole new memorable chapter to the saga of our favorite space janitor. 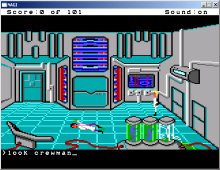