Early action/adventure game that is another oldie but goodie from Synapse, published by IBM in 1984. According to MobyGames' description, Shamus lets you "...explore over 120 rooms to find the evil enemy. Shamus is an exact combination of Adventure (the Atari 2600 game where you roam from room to room looking for items and avoiding the dragon) and Berzerk (the arcade maze game where you shoot robots and avoid Evil Otto). If you like those two games, you'll like Shamus.

A diverse array of special items can also be picked up for points or extra men. It's fun for ten or twenty minutes, but gets frustrating at times, boring at others."

The bottom line: if you like either game that inspired this classic, you will like Shamus. If primitive gameplay in 4-color CGA graphics isn't your cup of tea, then steer clear. In my opinion, it's good for a few minutes of nostalgic fun, but doesn't have the truly timeless gameplay (a la Alley Cat) to keep you entertained for long.

The game was developed on the Atari 400/800 series of computers. It is an excellent maze game that is very difficult to complete. It has 4 levels (black, blue, green and red) and each has enemies that get progressively faster. 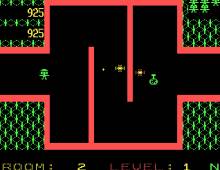 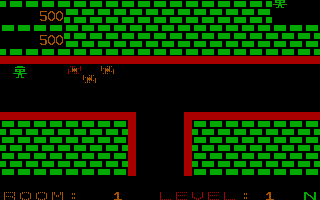 People who downloaded this game have also downloaded:
Return to Zork, Shadows of Mordor, Hobbit, The, Beyond Zork: The Coconut of Quendor, King's Quest 1