Infocom's first return to the famous Zork universe after a long hiatus is a funny adventure that retains much of the campy atmosphere that makes the original Zork trilogy a classic, but unfortunately falls victim to its own innovative adventure interface, unforgiving and illogical puzzles, and some very cheesy acting.

Okay, let's start with the good stuff. The plot is a typical treasure-hunting quest in the spirit of the original Zork trilogy, with a dash of some magic and evil woozle thrown in for good measure. While Infocom fans will mourn the passing of Infocom's legendary parser, RtZ tries to ease the pain by introducing an innovative point-and-click interface that allows a much wider of actions than other graphical adventures. Clicking on an object brings up a menu of possible actions you can perform with that object, and clicking the object on another usually brings up even more actions. The conversation interface is also innovative: every time you talk to a character, you can select the mood you want in order to set the tone and direction of your speech. Feel like some weenie is hiding something from you? Change to "angry" mode, and you'll intimidate him to submission. You can also ask people about any object in your inventory, or any photo you have taken. Sometimes doing so is the only way to obtain the much-needed clues for puzzles. Acting is downright horrible, canned, and cheesy, but at least you won't find too much of that in this floppy version, and all the characters and the overall atmosphere are in keeping with Zork's wacky, easy-going fantasy mythos. Although longtime fans will be disappointed at the absence of creative spells in the game, the sight of that famous white house is sure to elicit a chuckle or two and a warm feeling of nostalgia.

Unfortunately, for all its designers' efforts to make RtZ a game worthy of the Zork name, all its good points crumble under the weight of the game's worst weakness: ruthlessly unforgiving puzzles. They are not just bad-- they are so illogical and obscure that sometimes you'll be solving a puzzle correctly without knowing why that particular solution works... even with a walkthrough in hand. One example of the game's puzzles will help illustrate my point: at the beginning of the game, you come across a curious plant ("it's a bonding plant," is all the game will tell you). Using the delightfully versatile interface, you can either dig it up, cut it with a knife, or pull it up. If you don't use the "right" way, the plant will die, but you can still carry it around. Now, woe be the time when you finally realize after progressing through half the game, that you actually need a live plant to solve one puzzle. There is no way to revive your plant, although there *is* a way to get a new one... the clue to which is hidden quite well. That's the problem with the game in general: clues are scattered in the most unlikely places, including minute references in the Encyclopedia Frobozzica, a thick fan-made book about Zorkian mythos included free with the game. Suffice it to say that anyone who's been spoiled by LucasArts' excellent cannot-get-stuck-or-die game design (and that's most of us) will likely get very frustrated playing RtZ.

I must admit, however, that I had a lot of fun with RtZ even while I grumbled at its idiosyncracies... and that's probably a sign of how much I truly care about the game (and Zork in general). Despite all my nitpicking and grumbling, Return to Zork is a definite must-play for all adventurers, although they should brace themselves for some ruthlessly illogical and impossible puzzles. While not the best in the series, the game definitely succeeds in bringing the Zork universe to life, with the appropriate sense of silly humor that we all know and love. The game's many innovations and wacky plotline are enough to glue everyone to the screen until the very end. Just think of it this way: you know you're really going to miss Boo's incessant "Want some rye? 'Course you do" after your adventure is over [EG]. Remember: save often-- save VERY often. 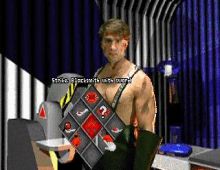 People who downloaded this game have also downloaded:
Beyond Zork: The Coconut of Quendor, Zork 2, Zork 1, Zork Zero, Zork 3