Duncan Stevens posted an excellent review of this ultimately disappointing old game from Infocom in SPAG, so I'd like to quote it here in full: "The original Zork series was probably best described as treasure hunt with a satirical touch: there was humor here and there, but most of the plot was straightforward adventure/fantasy, and elements of the ridiculous were added only sparingly. Not so in Steve Meretzky's follow-up, Zork Zero, a "prequel" that subordinated the adventure aspect to over-the-top camp--and while it works in many ways, fans of the austere feel of the original series may find it a bit jarring.

The plot, though ostensibly serious, is largely a romp. The game tosses you into the fall of the Great Underground Empire, as the descendant of a witness of Dimwit Flathead's death at the hands of the wizard Megaboz and Megaboz's curse on the empire, and the heir to a fragment of parchment that might provide a clue to averting the curse. 94 years have passed since the curse was imposed and the day has arrived, and it is now up to you to break the curse by finding two items belonging to each Flathead and adding them to the wizard's cauldron.

Perhaps the most peculiar element of Zork Zero is the puzzles. There are some clever and original ones, certainly--particularly one involving a certain chessboard--but most are classic logic puzzles cribbed directly into the game. There is, for example, a Towers of Hanoi puzzle--thoroughly frustrating to wade through for those of us who already know the idea--and a "lady or the tiger" problem, and a Hi-Q game, and even a measure-out-the-fluid-with-two-different-size-vessels puzzle... The problem with this isn't that they're poorly done, because most of them succeed brilliantly (and many are adapted to the context); several games are represented in full-color VGA graphics, even. It's just that a set of minds as creative as those of Infocom shouldn't need to copy so many puzzles from the canon. Still, in that this is a long game with lots of puzzles--virtually every object of significance, and there are many, requires some sort of puzzle-solving to obtain--the derivative aspect isn't as troubling as it might be. Most of the puzzles are relatively straightforward, though a few require rather exact timing, and it is sometimes possible to lock yourself out of victory merely by lack of foresight regarding transportation. The parser is up to the standard of Infocom's later games, with the inclusion of function keys that can stand in for common commands. (Since this is a Steve Meretzky game, one of the defaults is "give magic locket to moose.") There is an internal hint system (non-adaptive) which takes care to preserve the copy protection and even makes fun of you if you resort to it too often.

But technical wizardry isn't enough to overcome the game's basic incoherence: though the finale is impressive and suitably surprising, the game meanders considerably before that because it doesn't really have anywhere to go. When your plot simply requires that you pick up 24 random objects, it's hard to develop the plot along the way, and the one significant opening up of new territory isn't enough to really draw the player into the game. There isn't, in other words, enough payoff for most of your accomplishments; usually, you simply get another item to toss into the cauldron. Zorks I and II, though treasure hunts as well, restricted the initial area available far more than Zork Zero does, and conditioned more discovery on solving significant puzzles. Here, solving three puzzles, all of them easy, will allow access to virtually every room in the game. In moving away from the Zork trilogy's conventional-fantasy roots, therefore, Zork Zero loses something of what makes conventional fantasy compelling: danger, discovery, the intrigue of what might be next.

There are entertaining moments in Zork Zero, to be sure. It's questionable whether there are enough to keep the average player interested throughout, though, and to whatever extent it succeeds, it does so in a very different way from any of the other Zork entries. Though it has its moments, I found Zork Zero the weakest of all Infocom's text Zork games." 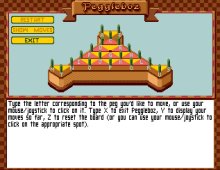