Beyond Zork: The Coconut of Quendor

Arguably Infocom's most unique interactive fiction (IF), Beyond Zork is a fun fantasy text adventure/RPG hybrid that attempts to do many things, and achieves most of them. Designed by Brian "Professor" Moriarty (who is more famous as designer of Trinity and Loom), Beyond Zork attempts to bridge the narrative gap between two of Infocom's best-selling trilogies, Zork and Enchanter. The plot, according to the game, goes as follows: "Dark times have fallen upon the South lands of Quendor. All the enchanters have disappeared without a trace. Monsters roam the countryside. And the taverns are filled with disturbing rumours and un-savoury characters. A simple peasant like yourself knows better than to get involved in the affairs of wizards. But everyone you meet seems intent on testing your abilities to the utmost. You find yourself drawn into a web of fantasy and magic, solving puzzles, avoiding traps and fighting monsters. Your strength and power grow with every encounter, until the most fabulous treasure of all - the fabled Coconut of Quendor - lies within your grasp."

What sets Beyond Zork apart from all other Infocom IF titles is the inclusion of RPG elements. Before venturing on your adventure, you first need to create your character, RPG style, complete with various statistics and skills. Unfortunately, the effects in the game of most of these skills are not obvious, and the rare chances to improve them are hard to identify as such. Combat sequences require more puzzle-solving prowess to succeed instead of your statistics and skills, and sometimes feel random.

RPG quirks aside, Beyond Zork excels in all the other areas that Infocom was famous for. Moriarty's storytelling talent is once again evident in the game's great storyline, cool plot developments, and consistently good writing. The game also introduces many new features, such as on-screen map and a separate window for your inventory. The parser is even stronger than Infocom's previous games, and the game's vocabulary is quite big.

Although the RPG elements in Beyond Zork are well thought out, they come across more as an interesting distraction from traditional puzzle-solving than an integrated experience. Interestingly enough, Infocom's later adventure/RPG hybrid Quarterstaff is a better RPG than adventure-- quite the opposite of Beyond Zork. Fortunately, though, it's the adventure fans that the game was designed to please, and as IF, it succeeds in spades. Definitely a must-have for all Infocom fans, though it won't win over any die-hard RPGer. Highly recommended! 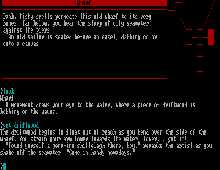 Beyond Zork: The Coconut of Quendor screenshot

People who downloaded this game have also downloaded:
Return to Zork, Hitchhiker's Guide to the Galaxy, The, Enchanter, Bureaucracy, Zork 1