Famous Tolkien's Middle Earth books were transfered to computer games and this was the first one (naturally, since it is the first book as well). The game follows the book's story closely and places you in role of Bilbo as he ventures into great adventures.

A classic game that started a completely new genre on C64 and was also ported to PC. A textual adventure with a few background pics was something new in the gaming industry. The game possesed a pretty big vocabulary and was pretty hard to complete. Now go and help Bilbo and Gandalf!

While I can't say I'm a great fan of text based adventure games and probably never will be I still like The Hobbit simply because it's based on the book with the same title by J.R.R. Tolkien. The Hobbit takes place many years before the more popular trilogy Lord of the Rings and you play as Bilbo Baggins (Frodo Baggins' uncle).

Like all other text based adventure games you have to type you through the entire game so this is something you have to get used to in order to enjoy the game fully. So direction commands like north, south etc. will soon be something you are used to typing. Compared to many other games in this genre the game offers a lot of words to be used which is probably the best feature in the game since less words will make it much harder to complete.

Overall the original story is followed pretty well and I especially like the picture you see every time you get to a new area or if something special happens. Of course the graphics are nowhere near today's graphics but you can recognize all the things from the books and this is what matters - at last for fans of this genre and of course the popular story. A recommended game unless you are only into action and/or sport games.

One of the first computer games based on Tolkien's works are based, appropriately enough, on his first Middle Earth novel The Hobbit. The game follows the book's plot very closely, as you guide Frodo's ancestor Bilbo the hapless Hobbit and his band of equally clueless neighbors into their first grand adventure. The game was revolutionary for its time, with vibrant graphics, big vocabulary, and surprisingly robust NPC interaction.

From The Tolkien Games Archive: "This is one of the most classic text adventures of all time; at least in Europe. The original game had a large vocabulary and very good character interaction for its time. It was probably the first time ever that such traits had been paired with graphics in any text adventure. In 1985 it was selected #1 in the magazine Sinclair User's Top 50 Spectrum Software Classics (but it only made 42 in a later Top 100 List in Your Sinclair). The game was also released as part of The Tolkien Trilogy.

The game was first developed for the TRS-80, but when the ZX Spectrum was released, it was decided to continue development on that system, because of the Spectrum's superior graphics and other capabilities. The first Spectrum version was called 1.1 to make it look more finished. A version 1.2 was later released with several bugs fixed.

A rumour that Tansoft created the Oric-1 versions is not true. Tansoft only distributed that version. In the United States, it was published a few years after its original appearance as The Hobbit Software Adventure, a much extended and improved version. This version is the first part of The Tolkien Software Adventure Series. In Europe, this version was only distributed for the C64 and still under the title The Hobbit. Across all platforms, the game sold in excess of one million copies.

The popularity of the game has inspired many parodies of it. So far, I know about The Boggit, An Everyday Tale of a Seeker of Gold, The Tebbit and Hobbit - The True Story. In addition, there is a German simplified BASIC version of the game called Der kleine Hobbit.

There are also references to The Hobbit in many other games. The Tunnel Like Hall picture is reproduced in Bored of the Rings, Gandalf and Bilbo appear in Werners Quest, there is a grave-stone with the text "R.I.P. The Hobbit" in the Commodore 64 version of The Quest for the Holy Grail and Quest for the Golden etc... has so many references that it is almost a complete parody of the game in itself. The game was rewritten in PL/I for an MVS mainframe by an employee at IBM."

Personal Opinion: to be honest I found that the game moved a bit too fast for my liking, especialy at the beginning. THe game is based on a classic piece of literature and so I expected to be gently introduced to the plot, not thrust straight into things. The NPC's too were slightly annoying, seemingly wandering around at random. But what the hell, it's a classic game and I love Tolkien, so I had to add it and you have to download it. 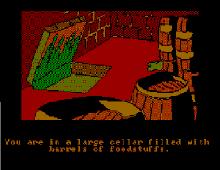