Shadows of Mordor is the second part of the famous trilogy where you, among other things, have to guide Frodo Baggins and Sam Gamgee through the lands of Middle Earth without losing the magic ring. Almost from the beginning you will notice the improved game story, pictures and actual game engine compared to the first part of this series. Whether the developers knew they had to do better with the second part or not isn't known but you would think so after comparing the two games.

The game takes almost exactly where the first game ended where you choose to control either Frodo or Sam. The game follows the story very close and not many will notice direct changes to the story although there are of course a few once in a while. As mentioned the game engine has improved a lot and that also means the dictionary in the game that are very essential in these text adventurers and there isn't anything worse than when you type a simple command that for some odd reason can't be understood.

There are several pictures included in the game (if you decide to have them displayed during the game) and especially for fans as well as those that have seen the movie it's nice to compare the graphics to the movie as well as to your own imagination. A decent adventure game but remember that it's a simple text adventure and not one of those point-and-click games.

This third game in the trilogy follows the adventure of Frodo and his band of fellow Hobbits from where Fellowship of the Ring left off as the Hobbits plunge into greater danger -- facing off with giant spiders, evil horsemen, and sinister evil. The game is a marked improvement over Fellowship of the Ring.. perhaps the programmers got back in time to fire that amateur they let design that game . 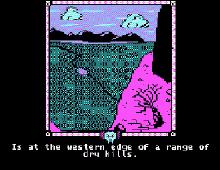 People who downloaded this game have also downloaded:
Hobbit, The, Fellowship of the Ring, The, Space Quest 0: Replicated, Peasant's Quest, Jack The Ripper