Monty on The Run

Monty on the Run is the excellent fanmade PC conversion of the third and arguably best in Gremlin's popular Monty Mole series of action/adventure hybrids that never made it to the PC. The review in Spectrum games magazine Crash says it all about what gives Monty on the Run a soft spot in Spectrum fans' hearts:

"The basic object is to get Monty on board a boat sailing for France and away from the long arm of the British Law. Careless as people are, there are sovereigns lying around all over the place to be collected, but Monty also needs a lot of equipment to make good his escape. Here comes the adventure element: some of the objects are useful, others are a waste of time, and some are deadly if touched, although a number of the nastier items become less so if something else relevant has been collected earlier. This of course means having to retrace your precariously achieved steps a few times. In addition to the collectible items in the game itself, before you start the game, you may choose up to five of 21 objects which you think might help you in your quest - of course, you may choose badly, but you'll never know until it's too late.... The game starts off outside a house, but the ship isn't too far away, and it wont't be sailing until all the correct items have been collected and safely stowed away at the bow and the engines prepared for sailing.

Monty on the Run is vastly bigger and more complex than Wanted: Monty Mole and contains many more inter-related elements which make it both a platform jumping game and one of skilled timing with adventure overtones." Overall, if you enjoy action/adventure hybrids, this excellent PC remake of Monty on the Run is well worth your time. Highly recommended, especially to fans of Dizzy series. 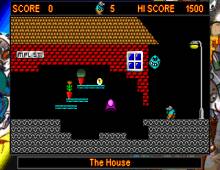 Monty on The Run screenshot

People who downloaded this game have also downloaded:
Oddworld: Abe's Exoddus, Wanted: Monty Mole, Out of This World (a.k.a. Another World), New Adventures of Zak McKracken, The, Maniac Mansion Deluxe