Wanted: Monty Mole is a great freeware remake of a classic Spectrum ZX/Commodore 64 game of the same name starring Monty, a brave miner mole who is determined to raid his South Yorkshire pit to snatch goal from Arthur, the 'big foozle' who lives in a vast underground castle. Similar to Dizzy games, you control Monty from a 2D perspective, and the gameplay is a mix between action and adventure: you have to collect a variety of objects and avoid dangerous machinery.

In addition to well-designed rooms that are all interlinked to form a maze, W:MM throws up a few guessing tricks and requires you to find the optimal route through each room. Monty himself is a cute character that eventually appeared in many more games. He can jump no worse than Manic Miner, and this game will fondly recall that classic Spectrum ZX series.

In contrast to Manic Miner which ends on the surface, you start this game on the surface and must make your way down into the mine shaft. Obstacles include moving platforms, crushers, as well as the usual complement of ghosts and monsters. Like most adventure games, some useful objects cannot be collected until a particular tool on the screen has been collected first. Overall, there are 21 rooms in the game to get through, and you will enjoy most of it. This PC version recreates the original in "retro"-style graphics with more colors, retaining the smooth gameplay and clever puzzles of the original game. Highly recommended to fans of action/adventure hybrids. 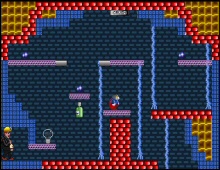