Unshadowed is a fun action adventure from amateur developer P. J. Richmond. The game makes up for its amateurish (and probably too cartoonish, given the subject matter) graphics with excellent puzzles that adventure fans will enjoy. The action is also not too frustratingly difficult, although you do have to be good at aiming the mouse. The review at Gamemakergames.com explains the rest:

"You don't see story-driven Game Maker games too often, but Unshadowed is just that. The story involves Wade, who unwittingly finds himself in pursuit of a mysterious villain named Redlaw through the game's eight chapters. As he goes, he learns more about his family's involvement in the struggle between the power of light he wields and the darkness his enemy uses against him.

The author describes the gameplay in Unshadowed as a "mix of shooting and puzzle solving." This is a fair summary, as you find yourself about half the time fighting enemies large and small in action sequences, and the other half solving the game's many puzzles. You move using the arrow keys and use the mouse to aim your attacks and use the other magical abilities that you gain from time to time.

The game's graphics are all original and quite varied. It becomes obvious early on for this and other reasons that a lot of work went into Unshadowed. The graphical style sort of reminds me of things someone might draw in a notebook in school--rough at times, but colorful, detailed, and effective at making the game's world believable. This is also supported by well-placed music and sounds.

Back to the puzzles, this is a high point in the game. None are all that difficult, but there are many and each is unique and integrated very well with the areas. The abilities you gain as you progress not only aid you in battle but become an essential part of the puzzles.

I think this game just comes together well. It has rough edges in places and room for improvement, but it consistently presents you with fun and varied situations to the end." Highly recommended. 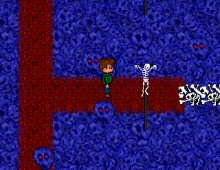