Another game featuring the world's most famous egg - Dizzy. This one is the best in series of great games made by Codemasters. Diasy (Dizzy's girlfriend) has been captured by the evil wizard Zaks. Only Dizzy is brave and clever enough to rescue her from a terrible fate. Leaving the safety of Yolkfolk's treehouse village, Dizzy sets out on his greatest adventure - introductory story copied from the game.

Fantastic Dizzy (a.k.a. Fantastic Adventures of Dizzy) is one the few Dizzy games that were not released for the Spectrum, the system on which the series was well known. Instead, Fantastic Dizzy was first released on the NES, followed by the PC, Sega Master System, and Game Gear versions. It was also notable for being the last adventure-style Dizzy game ported to the PC (the series itself has one more adventure-style game, i.e. Dizzy The Adventurer, but that was the NES remake of Prince of The Yolkfolk, which was released earlier for the PC). Gameplay should by now be old hat for anyone who has played the previous three Dizzy games. You guide Dizzy, the little egg man, as he wanders around a leafy forest (as well as a medieval-looking town, a lost mine and an underwater section in this particular episode), picking up bizarre objects and using them in even more bizarre ways to solve strange puzzles. Fortunately, the first few puzzles are easy ones designed to get you into the swing of things (e.g. use the plank of wood to make a bridge across the spikes, give the big lump of meat to the monster to stop him from eating you). The puzzles quickly become devious, giving you the kind of mind-wracking frustration that makes for a real sense of reward when you finally solve one. Solving puzzles often opens up whole new areas, with different backdrop, so you always have an incentive to grit your teeth and move on.

In addition to fun adventure puzzles, Fantastic Dizzy also introduces a few arcade sub-games to the standard Dizzy formula, including an Operation Wolf-style shooting gallery and a tile-shuffling puzzle game where you can win extra lives, but these are mere icing on the cake. Overall, if you are a Dizzy fan, Fantastic Dizzy is a great game that is well worth the time spent. It's much longer, looks better, and sounds better than previous Dizzy games. Highly recommended, especially if you like twisted puzzles a la Coktel Vision's Goblins series.

Okay to start off you should know that I am referring to the games on the ZX Spectrum (128k for the tech-heads). This is because more games came out on the Specky (Spectrum) and its that which the games were originally coded on (they were ported to many other systems including the Amiga and the PC).

Okay, so you may be asking, "so what the hell is Dizzy?" Well, it's a game that was made on the ZX Spectrum in the 1980's but finished its reign on the PC and Mega-Drive (Genesis for the Americans). The basic concept of the game is that you are a egg that is called surprisingly enough Dizzy, you are part of a small village that has "the yolk folk" inhabiting it. The Yolk Folk are your family and friends.

The basic plot is unusually the same in these games "Zack the evil wizard has captured Dizzy's friends and girlfriend, Dizzy is obviously pissed at this and sets off the find his friends to defeat the evil wizard Zack". You accomplish this task by jumping around many, many screens of pure fun picking up objects and solving tasks.

In all there were 7 PURE Dizzy games (Dizzy, Treasure Island Dizzy, Fantasy Land Dizzy, Magicland Dizzy, Spellbound Dizzy, Prince Of The Yolk Folk and Crystal Kingdom Dizzy. (There was another game called Fantastic Adventures of Dizzy that was released on the Mega-Drive and the PC but I don't count that as being pure for reasons specified later). Dizzy also formed a few Spin-offs, the obvious ones being Kwik Snax (which was a puzzle game that had a super cool Dizzy rock band in it :D), Fast Food Dizzy (PAC-Man Rip-off ;)), Dizzy Down The Rapids (Action game involving Dizzy in a barrel and apples), Panic Dizzy (another puzzle game) and Bubble Dizzy (in which you had been thrown off a pirate ship into the deep water and have to find you way up to the surface by riding bubbles. Hell a magazine (crash magazine) even made its own version of Dizzy (Dizzy 3 1/2) as the release of Dizzy 4 was getting close.

If you're still in puzzlement of why the creators (the Oliver Twins), created their whole game around a load off eggs! Then think of it this way; Mario is one of the best selling game series ever and that is about a Italian plumber created by some guys in Japan... go figure?

The Fantastic Adventures of Dizzy (Mega-Drive and PC only):

This was the worst Dizzy game by far, it was just a cheap attempt at getting a few extra bucks. This game basically combined elements of all the other dizzy games and like Crystal Kingdom was just a platform game with easy puzzles. The plot of this game I have to say I have absolutely no idea played it for about 10 mins, realized it was crappy, turned it off and hung my head in shame at the disappointment of this game. I have to admit this was Code-Masters fault and NOT the Oliver Tiwns, as they were the specky people.

Graphics are the best seen on a dizzy game and so is the sound, in my view this game is not really worth the floppy disk it came on.

Music: Just HAD to put this in, the music is great! The tunes stick in your head for years.

Bad things about Dizzy: Yes there are some bad things about these games :O. Basically the controls are one, as you can sometimes jump too far or to short and you die, you can lose all of your lives on one small part like jumping over a lake. After you have got real far and that happens, you get pissed off quite a bit. 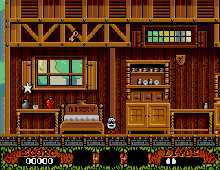