Dizzy is going to visit his girfriend Daisy with a nice present for her - a pearl necklace. But something went wrong during the trip - the ship on which Dizzy was traveling sunk and Dizzy is in trouble.

Your goal in this simple game is to reach the surface by jumping on the bubbles. You will also have to collect pearls and keep an eye on oxygen level. Pretty original and easy game.

Bubble Dizzy was the last arcade-style Dizzy game released for the PC. This time, Dizzy was taking a boat journey to visit Daisy his girlfriend and give her a pearl necklace. However, a short while into the voyage Dizzy discovered her wasn't on a passenger boat; he was on a pirate ship captained by none other than the evil Captain Blackheart! Blackheart stole the pearls and forced Dizzy to walk the plank. As Dizzy sank into the mysterious ocean caverns he knew there was only one thing for it: he had to head for the surface, and fast.

Gameplay in Bubble Dizzy is a refreshing break from the mundane Pac-Man ripoffs Fast Food and Kwik Snax. You must help Dizzy get to the surface by riding on the bubbles. You only have a limited amount of oxygen (although more can be collected) and if it runs out, then you lose a life. You must also collect the pearls from the sea bed and ledges so that Dizzy can give Daisy a pearl necklace at last. Of course, there are also creatures to watch out for-running into them reduces your oxygen.

Bubble Dizzy is one of the better (and more original) Dizzy arcade games, but it is still much too easy - you'll probably be able to complete it on your second or third try. Even so, the refreshing game concept and flawless controls, along with attractive graphics, will keep both Dizzy and arcade fans happy for the few hours it take to complete. 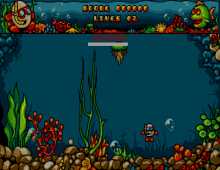