Dizzy Remake is a superb PC remake of Dizzy, a great platformer/adventure hybrid that spawned an entire series on the Amstrad CPC and other 8-bit computers. This first game starring our egg-shaped hero was never released for the PC, so this remake is a welcome addition.

The plot and gameplay, from the original release, go as follows: "Dizzy was exploring the haunted forest, looking for berries, flowers and a piece of wood with which to make a club when he uncovered a mystifying stone slab. Brushing the dirt aside he was able to read (after a great deal of head scratching) the faint inscriptions.. 'The Alestowuffober Potion.' Dizzy remembered his Eggfather had spoken of such a potion. 'It is the only way to rid our land of athletes foot, and it can also be used to destroy the Evil Wizard Zaks'. Dizzy trembled with fear as he recalled these words. Zaks brought fear to all the village, he cast spells that turned people old, made men blind and made it rain every Sunday afternoon during Cricket. Dizzy was determined to put a stop to all this, he would be the hero of the yolkfolk!!!

The aim of the game is defeat the evil wizard Zaks! To do this you will need to collect certain ingredients to create a potion which you will then use against him. The potion should be made from a leprechan's wig, a clouds silver lining, a vampire dux feather and some troll brew. Once picked up, simply drop them into the cauldron at which you start.

Lke most things in life, this task isnt that easy. You must also solve myriads of puzzles in order to first find the wizards castle, but finding the castle is not the only tough thing around. Not a chance! Vampire bats, Ghosts, Evil birds and spiders are just a few of the creatures that will try to stop you dead in your tracks. These were sent upon the land by Zaks so that nobody could end his rule. Theres also some very long and hazardous jumps that await you just to top it all!"

Like most subsequent games in the series, Dizzy plays like a platformer crossed with adventure genre. You need to jump and roll to avoid or kill various obstacles and enemies, but at the same time you also have to pick up objects and use them at the right moment to solve puzzles. Dizzy can only store one object at a time, so there is some back-tracking involved when you need to pick up something else you left dozens of screens ago. As a bonus, you can try to collect the 30 coins that are scattered throughout the game, many of which are well hidden.

This PC remake breathes new life into Dizzy with excellent SVGA graphics that preserve the 'cuteness' of the original, faithful gameplay, and even a great soundtrack and sound effects. If you are already a fan of the series, you will have a lot of fun playing this game. If you don't know who Dizzy is, but you like adventure/platformers in general, give this game a go - you might just be surprised of how creative cross-genre games can be in the 'olden days' of gaming. 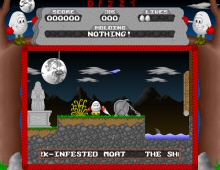