One of the most unique adventures ever made, Loom is a brainchild of Brian Moriarty (the brain behind Infocom's Wishbringer and Trinity). The game's intriguing plot is enough to ensure its "classic" status: you are Bobbin Threadbare, the mysterious "Loom child" and member of the Weaver Guild who must embark on a perilous journey to follow his guild members who were turned into geese and flew away from the Loom island. Moriarty raised the game's originality even higher by giving us no inventory. Instead, all puzzles in the game are based on "spells" cast by playing notes on a magical staff. Definitely a must-have for all adventure enthusiasts.

Loom was an overture to the LucasArts' adventure games boom of the nineties. It is clear that games such as Indiana Jones and the Fate of Atlantis or Monkey Island series, slowly evolved from the "blueprints" of Loom. The interesting part of this game is that, unlike other traditional adventure games, this one doesn't have an inventory or an action system. The only thing you need to use throughout the game is magic, and the spells are casted using a musical instrument that you carry. This may sound simplicity, but the game is carefully designed so that it offers challenges that aren't any easier than in other adventure games. The ambience throughout the game is very mystical and eerie, and that gives it a special "feeling". The story is a little bizarre and I will not disclose any details as you discover the actual storyline while playing the game. If you are a LucasArts adventure games fan, you certainly shouldn't miss this one! 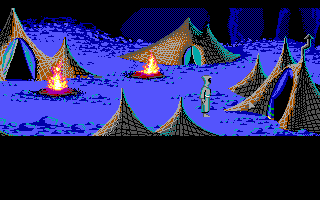