A polished remake of an oldie Spectrum ZX computer game, Invincible Island is a fun entry in Retro Remakes' One Switch Competition. The plot: an evil man named Xatro left seven parchments on Invincible Island, awaiting discovery by intrepid adventurer. To find the scrolls, you have to climb mountains, explore a town, and descend into the bowels of the earth. Game locations are displayed with graphics on the top half of the screen, while all descriptions - of locations and items - as well as game commands are displayed at the bottom half.

You would think it impossible to design an adventure game that utilizes only one keyboard button, but with this game, Andrew Mason proves not only that it can be done, but can be done in a surprisingly intuitive and fluid manner. The one key that you use in this whole game brings up the menu of commands, and you press it again to choose the combination of verb and noun you want. Very easy to learn, and works very well.

The game itself is faithful to its 8-bit original, down to primitive graphics. The game is quite good, although it can be frustrating - I almost gave up in frustration when I suddenly found the third scroll. The lack of clues in general makes this a difficult game, although the semi-interesting storyline and decent puzzles make the game worth finishing. Recommended, although only for the most patient among adventure gamers. 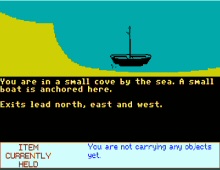