Journey is an epic fantasy game that marks a radical departure for Infocom: the entire game is played similar to a choose-your-own-adventure book, in which you choose actions from a menu of choices. The lack of parser surprisingly does not lead to lack of interaction, as there are always many choices to choose from and many possible solutions to the same puzzle, including optional ones. In Journey, you become part of a well-written epic, controlling a band of hardy adventurers as they set out to find the cause and remedy of failing crops in their small village.

Despite the game's claim that many puzzles are optional, you'll quickly find that the game isn't as non-linear as it seems: you might make your way to the final stages of the game, only to discover that you cannot continue because you didn't solve some puzzles in the past in an "optimal" way. This is most aggravating with the game's magic system-- spellcasting requires "essences," (e.g. air and earth), which are extremely hard to find (you'll have used most or all of them by the game's finale). Because the game never hints at how much essence you will find, you are free to waste a lot of them in solving various optional puzzles, only to find out later that you need more than you have. This "realism" makes Journey a frustrating save-and-restore type of game, and this may intimidate IF newbies.

This complaint aside, however, Journey is a very well-written, well-paced game with a plot that will keep you guessing to the end. Its non-linear feel, no matter how illusive, is a refreshing change from typical interactive fiction. The ability to control multiple characters and see the world from their different viewpoints also adds a great deal to the atmosphere. Definitely a must play for everyone, although be sure to save a lot, and don't waste the essences :) 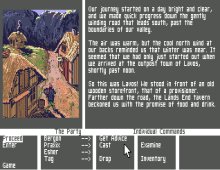 People who downloaded this game have also downloaded:
Hitchhiker's Guide to the Galaxy, The, Beyond Zork: The Coconut of Quendor, Leather Goddess of Phobos [Solid Gold], Arthur: The Quest for Excalibur, Bureaucracy