J.B. Harold in: Murder Club is a little-known PC conversion of a TurboDuo game of the same name. As investigator JB Harold, you must investigate the murder of a well-known businessman and bring the murderer to court. Gameplay is very much "by the book": interrogate suspects, submit evidence for analysis, establish the motive, method and opportunity of the killer, and finally see if your case stands up in court. Despite some writing quirks (perhaps due to poor translation), and somewhat "dry" gameplay, it's still a solid and thoroughly challenging game. 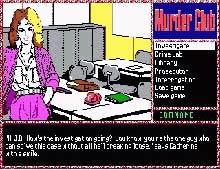