This Telarium's excellent masterpiece deserves a special place in your gaming collection. Definitely one of the few detective games that has high addictiveness, realistic and believable characters and interesting well-written plot.

You're Perry Mason, a well known detective that solves mostly homicide crimes. You're on your duty patrolling streets when you suddenly hear from your radio that a murder has been done, unfortunately it is your client that is accused from murdering her husband. Police have found her just a couple meters away from her dead husband, holding with murder weapon and totally unaware what has happened.

Your primary task is to prove your clients innocence, secondary task is to solve who is the real murderer. To accomplish both of these task you need to find evidences, interrogate suspects and win the court-battle. Solving case needs you to have people to run background checks, that's where your personal assistants come around. You can send them to find information from some certain suspect, but you have to remember that they only can do a limited amount of work.

Describing Perry Masons atmosphere is almost impossible, music and sound effects that depends on how tight the situation is are marvelous. It's absolutely amazing how accuracy has Telarium simulated court-battle and cached the atmosphere. Definitely a must!

One of my most favorite IF ever, Perry Mason: Case of The Mandarin Murder is so well-designed and entertaining that, for once, I gleefully put up with Telarium's limited parser. As the shrewd defense attorney Perry Mason, you are hired to defend a woman accused of murdering her husband. In the process, you must investigate the murder, interrogate suspects, analyze clues, then present your case in court to the skeptical jury.

Perry Mason is not only addictive because it showcases a well-written plot and believable characters, but most of all because its depiction of court procedure is so realistic it could easily be billed as "lawyer simulation." While collecting and analyzing evidence that will get your client off the hook are not difficult, the real challenge comes in court, where you must carefully phrase your questions to the witness on the stand, and adjust your line of questioning in response to the jury's reaction. You can FROWN to intimidate a witness to open him/her up for more aggressive questions, raise OBJECTION to the prosecutor when you have valid reason to do so, ask witness to DESCRIBE their relationship with other suspects, and show various evidence to the witness to provoke desired response. It is nothing short of amazing that Telarium's parser, which is in many ways inferior to Infocom's, was more than adequate to handle this intriguing game. If the going gets tough, you can ask Della, your trusty assistance, for advice on what to do.

There's simply no other game like it even today. For all its tough challenge and grainy CGA graphics, Perry Mason perfectly captures the essense of a defense attorney's work. 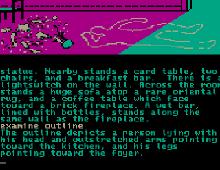 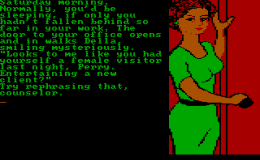