The first Sherlock Holmes game ever made for PC is a fun interactive fiction title that features an all-new mystery created specifically for the game. The premise is that aging Holmes, now in his 60's, found himself embroiled in a murder mystery abroad the steamship S.S. Destiny. Because his acumen is not as sharp as it once was, he relies on you, longtime companion Dr. Watson (you, of course), to help him on the investigation. The designers obviously went to great lengths to immerse you in the experience without contradicting the well-established Holmesian canon: Holme's failing health is a perfect excuse for Watson's major role, and the whole case is explained in the manual as a "lost manuscript" found after Holmes' death. But enough of the setting-- how does it play in Peoria?

Unfortunately, gameplay itself is a mixed bag. Although the parser is quite good (you can use AND to string several commands together, and use pronouns), the only verbs you will really need to use to finish the game are limited to FOLLOW, TALK, and what other commands Holmes suggests you to do. This is because Holmes always gives not-so-gentle advice on what you should be doing (perhaps he doesn't trust Watson's judgment), and many actions you can do don't seem to have a bearing on the outcome, except to help you understand the final solution better. This doesn't mean that the game is easy, however-- there are dozens of characters and potential suspects, and the game has a strict time limit (although you wouldn't know it from the start). This means that you must observe people carefully to determine suspicious characters to follow, what to ask other characters, and so on. There is an immense amount of writing and detail here; there are many interesting conversations to listen to, and even a show or two to watch. The mystery is broken into 6 smaller cases, all of which are inter-related into an intriguing larger plot. The game will notify you when a case has been solved, so you always know if you are making progress.

In the end, whether or not you will consider it good will depend on your expectations. If you want a game where you control all the action, with challenging puzzles worthy of Holmes' attention, this is not the game for you. However, if you enjoy a good read and don't mind being a passive observer, or "lead" by Holmes to the conclusion, then you will tremendously enjoy Another Bow. What the game lacks in creative puzzles, it makes up in spades by excellent writing and a well-woven plot that may not be another Study in Scarlet because it is a pastiche of well-known mystery plots, but is very intriguing nonetheless. After all, what other game allows you to order escapist artist Houdini around, join in a lively debate with Gertrude Stein and Sir Lawrence of Arabia, or enjoy dinner in the company of Picasso and Thomas Edison? Far-fetched though it may be, Another Bow is a highly entertaining interactive novel that indeed deserves the label "Living Literature." As avid reader and Holmes fan, I highly recommend Another Bow to fellow IF fans. 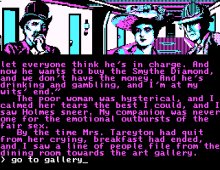