Flight of the Amazon Queen

Quite possibly one of the funniest games I've played, very similar in many respects to Monkey Island 1 & 2, except this is made by a group of Australians.

This beautiful blend of comedy and puzzle create a Lucasarts/Sierra quality game, both for free, and a small download size. (Reasonably anyway.)

The sick and twisted humor (ie Comedy Breasts) provide a good laugh and the general behaviour of the main character will get a couple of cheap chuckles out of you.

Definatly one of my favorite adventures games, yes, even better than Monkey Island 4, and I highly recommend stopping everything just to get a little bit of speed downloading this.

Flight of the Amazon Queen is an adventure game set in the '40s, you take on the role of Joe King, a pilot for hire who is given the job of flying Faye Rusell the movie star into the Amazon jungle for a photo shoot. At the beginning of the game however, Joe runs into a little bit of trouble with a dutchman who is simply called 'Anderson', Joe has to find a way out of the hotel room that he has been locked in and catch up with Anderson before he steals his plane and takes all the glory of flying Faye into the jungle.

Amazon Queen would have to be one of my most favourite adventures, it has a nice colourful look and also provides a smile or two with it's nice humour, not only that but there are also some challenging puzzles and plenty of places to explore in the vast jungle. Although it is seen as a LucasArts 'rip off', it is essentially a fun adventure - one of which is also replayable, if you have the CD version then you'll find it even better with great speech.

This charming game from a not-so-well-known Australian developer puts you in the shoes of Joe King, freelance pilot hired to escort actress Faye Russell to a photo shoot deep in the Amazon jungle. The game is not up to par with LucasArts games (which are obvious inspiration here), but it still offers plenty of solid puzzles and a gentle off-beat humor that will elicit a laugh or two and leave a smile on your face at the end. 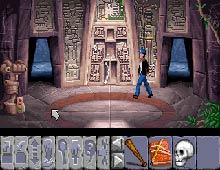 Flight of the Amazon Queen screenshot

People who downloaded this game have also downloaded:
Maniac Mansion Deluxe, New Adventures of Zak McKracken, The, Escape from Delirium, Legend of Kyrandia, The, Gobliiins