When I first saw this game I though it was an unknown game from LucasArts. Just look at that game engine... This is a great game that most of you never even heard of. You, as an archeologist (if I remember right) were sent into the sewer system to investigate an archeological site that was found some time ago. Something went wrong and You were trapped inside. After a while You'll get into the control room and be a witness of a murder...

I'm sure you know The Secret of Monkey Island series from Lucas Arts so you will most likely recognize several things in Escape from Delirium as well. The game reminds a lot of the Lucas Arts games with everything from the character to the humor included in the game.

You play as Paul Cook that is involved in a highly dangerous and intense story with terrorists, thieves, bombs and much more. As mentioned the humor is simply great and while the game isn't as funny as Monkey Island it is much nearer than many other adventure games. Virtual X-perience has really made good use of the popular point-and-click game engine. The graphics are also in the same kind of genre if you could call it that and Paul Cook might as well be named Guybrush Treepwood as it is almost the exact same character.

Sadly the game isn't that big meaning which is a bit sad because the game story and general game is quite good and it would have been great with a longer story. If you enjoy other point-and-click adventure games you will also enjoy Escape from Delirium without doubt. A great game from the small company Virtual X-perience.

Escape from Delirium is a fun shareware game by a small German company Virtual Xperience. The game's plot sounds as if it were borrowed from one too many Indiana Jones movies, but with some neat twists: you are Paul Cole, an archeologist sent to investigate an antique corpse found in an abandoned subway tunnel. As you are descending into the site, your rope is scratched, making you slip and fall into the darkness below. While trying to find a way up again, you will discover a supervising room of the museum above you. At that exact moment, you notice a man breaking into the museum on one of the monitors. Unfortunately, the burglars managed to steal a valuable stone plate which is rumored to show the way to a source of unbelievable power. As the press prints the name of a wittness - YOUR NAME - in the papers your fate is sealed. The next day you are to fly to court to Washington D.C. As if THAT isn't bad enough for you, a terrorist appears during your flight and directs the captain to fly to the Philippines...

Unfortunately, the game itself fails to live up to this exciting plot, as most (if not all) puzzles are borrowed from previous adventure games, most notably LucasArts', and they will therefore be very easy to longtime adventure fans if not downright boring. How many times must we endure the use-someone's-hand-to-pass-security-scanner, or the replace-some-real-thing-with-a-fake-thing kinds of puzzle? The interface, which is virtually identical to LucasArts' point-and-click adventures, is intuitive and convenient. The dialogues and plot development are competent, if nothing special.

In the end, Escape from Delirium feels like a game that tries to hard to be what it is not-- an amateur-produced adventure. The designers could have made this a much better game had they try to come up with puzzles on their own, instead of borrowing liberally from other games. Still, the high production values and good story make this one of the better shareware adventure games ever made. Fans of LucasArts' Indiana Jones games should find this a pleasant and easy diversion, and beginners will find it a good introduction to the genre. Compared with other shareware games, this is not as good as Igor: Objective Uikokahonia, but it is a good effort. 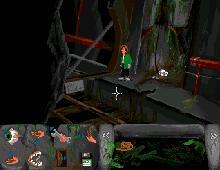 People who downloaded this game have also downloaded:
Flight of the Amazon Queen, Cruise for a Corpse, Igor: Project Uikokahonia, Maniac Mansion Deluxe, Lost Files of Sherlock Holmes 1 (a.k.a. Case of the Serrated