Cruise for a Corpse

Agatha Christie - type murder mystery set on a cruise ship in the 1920's that has people dropping dead all over the place while the player has to be at the right place at the right time to watch things happen and to question the passengers...before they are killed. It's extremely linear, sometimes very hard and repetitive, but the plot is solid and very good. Oh, and it has GREAT graphics for it's time...

It is a game where you can really slip into the story. You can poke around everywhere, look at everything, but be prepared for the odd red herring or three. And be prepared also for a liberal dose of conversation. Like every good police officer you need to interrogate your suspects again, and then again, and this, perhaps, leads to the one slightly flawed aspect of the game.

Of course, there is always a lot of dialogue in detective games, so Cruise can't really be criticized for this, the problem is that as you progress from person to person the list of questions grows and grows and, unless you have a phenomenal memory, eventually you'll forget who you have asked what - or is that what you have asked who?

Cruise for a Corpse is a fun murder mystery that is long on presentation but short on gameplay. The plot is heavily inspired by Agatha Christie's Murder on The Nile: the game takes us France, 1927, where aboard the luxury liner 'Karaboudjan III' the ship's owner, Niklos Karaboudjan, is found dead by his butler. Following the best murder-mystery tradition that a policeman or detective is always by chance on board, Inspector Raoul Dusentier is amongst the passengers. But before he can scrutinize the crime scene, some unknown figure knocks him out from behind and the corpse is removed.

At 8 am the following morning Raoul wakes up groggily in Niklos' cabin, and it is up to you to control his actions as he examines everything and everybody on the ship in the hope of solving the mystery. Cruise For A Corpse has a standard graphic-adventure interface that was improved from James Bond: The Stealth Affair and allows for more precise interaction with objects: clicking on objects brings up a menu of possible actions associated with the object, usually "examine" and "take." There is a very handy map which can be used to "warp" to any location instantly-- a great boon to anyone who had to use reams of mapping paper to finish the game (another great boon is that there is no pointless maze in this game). You can ask other characters about about their alibies, what you have heard from other passengers, and what you discover on board. Whenever you have made a useful discovery, the game clock progresses by ten minutes (similar to Sierra's Colonel's Bequest). The game ends at 6 pm, which means that you must make sixty 'discoveries' in order to solve the mystery.

Delphine's "cinematique" animation system is much improved from previous games, with very impressive results. Characters move realistically, and the action unfolds in innovative camera angles (walking on the ship's deck, for instance) that rival feature films. Gameplay, however, is flawed: there are too many objects to examine and interact with - sometimes appearing only after a certain time -as well as doors that are locked or unlocked at different times, etc. Worse yet, the game suffers from a severe pixel-hunting problem, as some objects you need to take are very small and difficult to distinguish from background graphics. This means that you will likely have to scour the same areas doing the same things over and over, hunting for those precious pixels to advance the plot.

For all its frustrations, Cruise for A Corpse is still an enjoyable mystery, mostly due to its great atmosphere and interesting plot. If it weren't for extreme pixel-hunting, some bugs, and absurd writing (it was translated from French), it would be a truly great game. 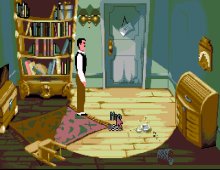 Cruise for a Corpse screenshot