Countdown is one of those games that could have been great, but turned out not-so-great and is now largely forgotten because of it. You play a secret agent who has lost his memory and find yourself incarcerated in a mental asylum outside Istanbul. The first part of the game sees you trying to escape the mental asylum and go some way to finding who you are. The mental asylum occupies a large part of the game and many players will spend most of their time here.

Once you escape, the game becomes a tale of international intrigue and espionage. It's not James Bond stuff -- Countdown is far too dark for James Bond -- but imagine a traditional spy movie with a slice of Dean Koontz, and you'll pretty much know what Countdown is like. The game leads to a finale at a famous landmark somewhere in Europe, but you'll have to play it yourself to find out where. The graphics are, in a word, pathetic. They weren't that good even for 1990 standards. When the characters walk, it looks as if they have something stuck up their nether regions, and the close-up portraits of NPCs could have been done far better. The worst thing is probably that the game doesn't effectively translate the atmosphere of the various exotic locations you visit.

Countdown did introduce one innovation in regards to sound and music. The Covox software that came with the game allowed you to play music and listen to speech through your PC speakers. This was great for me when I played it as a thirteen-year-old, because there was no way I could afford a SoundBlaster or Roland at the time. The music and sounds came out very grainy, but it was better than nothing.

Countdown could have been one of the all-time classics of PC gaming. Instead, it was a real dud. I remember one PC magazine (PC Format, I think) giving it a score of 39%.

Similar to Access' early Tex Murphy adventures, Countdown has an incredible amount of "pixel-hunt" puzzles and several pointless "arcade" sequences. The plot of this game is quite interesting, though (although they might have borrowed it from Asylum, a Commodore 64 classic): you are an amnesiac trying to escape the asylum and find your true identity. Overall, a fun game that's been overlooked by many people, despite frustrating puzzles, time limit, and some downright bad dialogues. 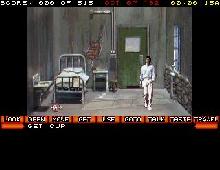 People who downloaded this game have also downloaded:
Crime City, Darkseed, Corruption, Clue!, The (a.k.a. Der Clou!), Cruise for a Corpse