One of my most favorite Magnetic Scrolls games (alongside The Pawn) and one of the best games ever made, Magnetic Scrolls' Corruption marks a departure for the company in many ways, all for the better. The result is one of the most original and gripping mystery adventures you'll ever come across.

In a big departure from the tongue-in-cheek fantasy settings that mark all three previous Magnetic Scrolls games, Corruption is set in the do-or-die world of 20th century corporate life that fans of The Firm will instantly recognize. You've just become a new partner in the lawfirm of Rodgers and Rodgers, got your new BMW and a shiny new office, when things start looking a bit dodgy. David, your formerly friendly partner, looks as if he's out to get you. Everyone, including your wife, David's secretary and the staff of the local hospital, are trying to make you look as if you're the guilty part in an insider dealing case. Perhaps it's time to engage in a little scheme of your own....

Even more unusual than the game's intriguing plot is the way it is played. Harking back to Synapse's classic Interactive Novel games Mindwheel and Brimstone, Corruption is played in semi-real time: you play against a 24-hour clock which advances one minute for every turn. Success depends not so much a matter of making your way around a set of different locations, as being in the right place at exactly the right time. As time passes, David's plot thickens unless you interfere, otherwise everything just goes on according to plan. All this makes the adventure very difficult, and you will likely need to replay or restore the game several times to get it right. As you make your way through the office building, visit the park (be careful crossing that road!) or just take a walk to the chemist's, you might come across nothing at all. Come back at a different time of day, though, and you might find a mega-hint, or witness an event that advances the plot in a different direction. There are clues about where you should be at what time, but they are mostly subtle and likely to frustrate beginners.

As one would expect from Magnetic Scrolls, the parser is very comprehensive, and there are plenty of extras to keep fans of graphical games happy. You can do all sorts of things with the graphics (turn them off, switch them back on, shove them up the screen, view them only the first time you enter a location and so on), and configure the location texts to your heart's content. Interaction is limited to asking or telling other characters about something, and though you can ask most people about anything under the sun, you'll only get a useful reply if you pick the right topic.

Because of its high difficulty level and somewhat of a "niche" plot (insider dealing, after all, isn't your average adventure-game premise), Corruption won't be everyone's cup of tea. It is certainly not a game for beginners, and even expert adventurers will need a lot of astute timing, patience, and perception to succeed. Despite all that, though, the game is very deep, well-written, and thoroughly engrossing. The freebies, which includes a cassette tape (included as sound files in the manual download below), are also some of the best ever made. Definitely a must-have for all die-hard IF fans, and remember: trust no one. 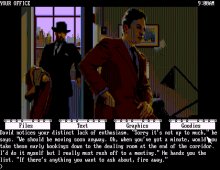 People who downloaded this game have also downloaded:
Bureaucracy, Clue!, The (a.k.a. Der Clou!), Bureau 13, Borrowed Time (a.k.a. Time to Die), Cruise for a Corpse