Cadaver is a fun isometric puzzle/adventure game from Bitmap Brothers. The first non-action Bitmap Bros. game, Cadaver lives up to the company's reputation of producing games with detailed graphics, addictive gameplay, and an intuitive user interface - in this case, a neat icon-based system that lets you manipulate items in the environment. As one can expect from Bitmap Brothers, Cadaver offers extremely high play value with hundreds of rooms to explore, a large range of spells and potions, and addictive gameplay. This positive review of the Amiga version applies just as well to the superb PC conversion:

" Who likes money? Whatever, I bet you don't like it as much as Karadoc the Dwarf. The villagers living in the shadow of the uninhabited (by humans) Castle Wulf offer him a bumper reward, plus all the treasure he can pick up inside, if he will enter the castle and rid them of the evil mage, Dianos. Only problem is, Dianos is at the end of five levels of monster killing, traps, spell casting and puzzle solving. Still, think of the money!!! You take charge of Karadoc and off you go to the castle. The object of course is to solve the puzzles on each level to open the door to the next level, thus eventually reaching Dianos and, er, killing him.

The levels (which correspond to the floors of the castle; you start off in the caves under it and finally meet Dianos on the battlements) are pretty big and are filled with rooms and chests to explore and monsters to kill. The puzzles, in the main, are fairly straightforward as long as you remember the golden rule: Search everything! Barrels, chests, pillows, armour on the wall - everything! It's usually fairly easy to work out what to do with whatever you manage to pick up - although Cadaver is one of those games that will let you pick just about anything up, regardless of whether or not it can be used to progress. However, scattered throughout, there are a few puzzles that are not very intuitive. On level 5, for example, you have to put a gem into a gemlock but you can only do this if you let the gemlock run down your energy to practically nothing! You'd probably not think of doing that! There are levers in one room which do something a few rooms away and there are levers which need to be toggled a few times.. I guess the thing to do is to experiment, but it would be nice if some of these puzzles were a little more logical.

The game is isometric which makes for some awkward moments negotiating obstacles like pits, spikes, flailers and, of course, monsters. Likewise, trying to kill monsters with stones and shurikens can be a bit hit and miss (literally), although you do get Massacre Spells and the like which are pretty effective! Control is by joystick but there is heavy use of the keyboard to access your backpack, map, different weapons etc. It all seems a bit much at first but when you get used to it it's fine.

In conclusion, this game will keep you occupied for weeks, if not months. It's a good attempt at an "RPG without the trainspotting element" as the Bitmaps' put it. My main criticisms of it are that there are a few very illogical puzzles. Also, the fact that the game will let you do practically anything to most objects makes for more head-scratching moments than games that 'force' you to only interact with objects in a certain way. That said, it's one of my favourite games ever, on any platform and if you haven't had a look, you really should!" 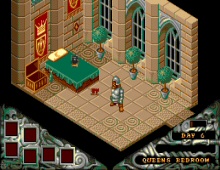 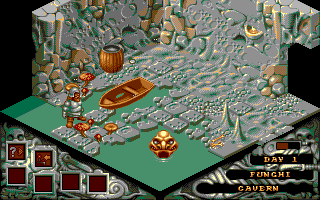