The Payoff was released in 1991 as an "expansion disk" to Cadaver, a fun puzzle/adventure/action hybrid from Bitmap Brothers. The game picks up right where Cadaver left off, offering additional four levels of action, puzzles and adventure. Although the puzzles are much more logical and less random than Cadaver, The Payoff forces you to fight many more - and tougher - enemies than in the first game. Still, it's a great fantasy romp that everyone should try out - the review of Amiga version says it all:

"After winning the mighty battle with Dianos and lopping off his head, Karadoc the Dwarf staggers back to Wulfheim, groaning under the weight of all the gold pilfered from Castle Wulf (plus of course, Dianos' head!). Now to collect the reward that the villagers promised him for ridding them of the evil mage.. Unfortunately, Karadoc discovers that most of the villagers have been turned into monsters! Not being the sort of dwarf that gives up on rewards easily, Karadoc sets out across 4 more levels with money (and welshing villagers) on his mind.

The main differences between the first game and this add-on are that The Payoff has outdoor scenes, the graphics are slightly better and on the first level Karadoc has the help of a friendly monster, Snot (according to Bitmap Steve Kelly!!!). The appearance of Snot is fairly brief unfortunately - his continued presence might have added an extra dimension to the game. Also, the appearance of more magic mushrooms (finish the game! :-) might have added extra fun, although there is still plenty of alcohol for Karadoc to drink scattered throughout! There's a fun drinking game to be played (and Karadoc will die if he loses - hey! they don't play games like that in the pubs I go to!! :-) and there's also a secret quiz room - but no prizes for getting all the questions right.. Pah! One of the better spells to be found is 'Talk to the Dead' which, when cast on a corpse in the mortuary, yields an 'Urgh, what was I drinking last night?' from the deceased. Heh, brilliant!! Beyond all this, the game is more of the same as Cadaver (no bad thing IMHO) and it uses the original games' 'Game' disk, so the animation of Karadoc, interaction with objects and weapons etc are exactly the same as in the first game.

The Payoff definitely improves on the original game a little, while containing all the monster fighting, puzzle solving, traps and exploring of the original. The puzzles are more logical (IMHO) although there are still a few cases that aren't - off the top of my head, one example is a hole in the wall; you give it some money and it gives you something useful; give it more money and it'll give you something else useful. Then it says (yes, a talking hole in the wall - crazy world, isn't it?) that it doesn't have anything else to give you but you need to keep pumping the money in there until it eventually gives you something *crucial* to completing the level. That's not really what I'd call a puzzle... Again, experimentation and examining everything that looks 'useful' is the key and again, this game will last you a loooong time.

While The Payoff has improved on Cadaver, I don't think there'll be any converts. If you liked Cadaver, you'll love this; if you hated Cadaver, well, chances are you'll hate this. It's still one of my favourite ever games and apparently it's all written using a special game language. Just to make it clear - you need the original Cadaver 'Game' disk. Cadaver: The Payoff just replaces the 'Levels' disk." 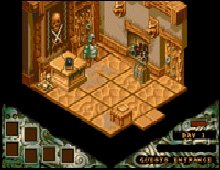