A wonderful adventure on all counts and one of the most humorous games I've ever played, Callahan's Crosstime Saloon, like Spider Robinson's gentle sci-fi novels it was based on, is chock full of devilish puns, humor, and charm.

**SPOILERS ALERT ON** In the gameworld, the premise is that Earth is actually an art exhibit whose sole purpose is for the entertainment of the "Gods" (whoever they may be). One of the Gods, Gingranich (!), believes that there is nothing on Earth at all worthy enough to justify its continued existence; he wants to cut Earth's funding. Fortunately for Earth, the Gingranich team Curator is in need of a beer. He stops into Callahan's where, through the course of five mini-stories, he learns what the regulars knew all along - that life is about sharing with others that which, when contained, means a whole lot less. It is after this point that a sixth story emerges, and you will need all the friends (and important items) you have met in the earlier five vignettes to prove that the Earth has value after all. **SPOILERS ALERT OFF**

As scruffy 60's musician Jake Stonebender, you will journey to 5 scenarios across time and space to help friends that include a squid-like alien, a vampire, and a talking dog, and ultimately save the universe. With nonstop puns and good puzzles, this is definitely Josh Mandel's (of Freddy Pharkas fame) best game to date. With non-linear gameplay (to the extent that the 5 episodes are self-contained and can be solved in any order), nonstop puns, inventive puzzles, and very well-written plot, Callahan's Crosstime Saloon is simply a must-have for every adventure game fan, and a sheer delight for fans of wordplay and other linguistic pastimes. 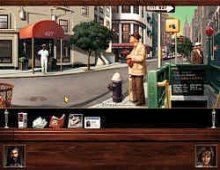