Beneath a Steel Sky

Robert Foster lived in peace in a small tribal village until one fateful day. For an unknown reason the Security forces of the great Union City arrived to the village and made Robert come to the city with them. Robert fought back but had no chance against them. But Robert was lucky. Something happened on the helicopter ride back to the city and it crash landed in the middle of the giant city. Robert survived the crash and managed to escape from the security. Now his only goal is to reach the ground level so he can get back to his village. But why was he abducted and who is Robert Overmann?

This game is one of the coolest adventures I've played. This was one of the first PC games I had ever played, and I bought it because of an excellent demo on my Amiga. The CD I have is full talkie and everything, and so if you can find a place to buy that version, I would seriously recommend it, because it is much more fun to play!

Anyway, going into the game, you play Robert Foster; he has lived in the "Gap" ever since he was a little child. He knew of no other world. But one day this ended and he was taken up in a helicopter to a huge city, protected by a huge force field. Union City was the name of this massive industrial city. It is filled to the brim with massive tower blocks. I guess the only way when you have filled a city space is up or down. So I guess they went up. Getting up and down these buildings is also not easy for Robert. Although soon, Joey will have a nice way to get up and down them. Joey is the robot in the circuit board and is a robot you will build later in the game. I won't say any more about that though.

So I guess you are wondering what is happening with Robert when you get into the game. Well, as soon as they enter the city, it seems someone has tampered with the helicopter controls, and you have had to crash land in the city, and then you did a runner. You then hid up on top of a wide open gritting above a factory, how the hell the security guard doesn't see you I will never know. Anyway, you have to somehow get past him. And to put it simply, the easiest way is never the best way. Anyway, as you will surely find out in your first few seconds of playing this game, you CAN die in this game. Although not very often, but I would suggest you save the game constantly just in case you in fact do die. I don't think it is possible to do anything wrong though, so unless you are a total nonce and can't figure the game out, then you should be able to complete it, even if it takes you a long time (which, in theory, it should).

This game has also very nice graphics. They are hand drawn by some award winning comic book artist, named Dave Gibbons. But they are extraordinarily well drawn and converted to the game. The characters are also well drawn and move smoothly and look good overall. The graphics are the standard for 1994, which was when this game was made. Along the way you meet many people, Good and bad and obviously, you have to do things with many of them, and exchange items, etc. Overall, this is a very fine game which any adventure game fan would enjoy.

Beneath a Steel Sky is a truly excellent sci-fi, cyberpunk thriller adventure set in a bleak post apocolyptic future. The game evolves around a place called Union City and focuses mainly on a computer system called LINC, which has taken over its creators minds and learnt from them human emotions such as greed and power. In the game you take on the role of Robert who was a young boy in Union City when his father was working on the LINC project, Robert and his mother then travelled away from Union City to another city called Hobart, but along the way the helicopter they were in crashed, Robert's mother died but fortunately, Robert survived and was adopted by the inhabitants of the gap, they gave him a last name, Foster (which was from a Foster Beer can) and Robert then lived his life there, even finding a little robot friend called Joey. Years after, the chief of the native people then predicted that an evil from a city would erupt soon and that the evil wants Robert Foster, a Union City security helicopter then arrives and an officer called Reich demands to know where Robert is, the security forces then find and take Robert away to Union City. As soon as the helicopter arrives at Union City, the guidance system malfunctions and the helicopter crashes, with Robert running away. The game then starts from this point. I could go on for a lot longer about the story, but most of it is told throughout the game and some of the manual has a bit of information. But of course, it would also ruin the fun to tell you everything. Also, what I have not mentioned above, is that the game is based on the artwork of Dave Gibbons.

Following the success of the Lure of the Temptress engine - 'virtual theatre', Beneath a Steel Sky adopted this too, an extremely simple and easy to use engine that uses the entire screen for the game view instead of a toolbar of such along the edge. The best part of this game was the *awesome* atmosphere, especially later on in the game, it even gave me a scare or two when playing late at night, combine that with the music and I thought it was the best adventure I ever played, (and it probably is) along with Flight of the Amazon Queen. The most disappointing part of Beneath a Steel Sky was that there was no sequel made at all - if Revolution are still going to make a sequel remains to be seen but it definitely has the grounds for one.

Revolution followed up on the heels of underrated fantasy adventure Lure of The Temptress with this excellent cyberpunk adventure that to this day ranks among the best cyberpunk games ever made.

Beneath a Steel Sky begins with a simple premise that gradually unfolds to include a lot of subtle threads and interesting plot twists: you play Robert Foster, a down-trodden citizen of the oppressive futuristic city that any fan of Orwell's 1984 will immediately recognize. In a quest to find your long-lost father, you will encounter many colorful characters and solve many gadget-oriented puzzles. Revolution's "virtual theatre" engine introduced in Lure of The Temptress has been significantly improved this time around-- characters follow their own agenda, and the solutions to many puzzles require astute observation and timing skills to disrupt their routine. One of the game's best features is Joey, your talkative droid sidekick whose wry remarks and wacky sarcasm will bring a smile to any Infocom fan who misses Floyd the robot in Planetfall, and help lighten the game's "dark" atmosphere. Puzzles are generally logical if a bit on the easy side, with the exception of very clever puzzles in the game's cyberspace world. The game is replete with well-written dialogues and excellent artwork by the famed British comic book artist Dave Gibbons (whose work is one of the best introduction sequences seen in a computer game). A must-play for all cyberpunk fans and everyone else.

This game is one of the most fun games there is. It is a point and click game, but it is actually pretty hard. You need to be observant in this game, because there are many things that you would not think of doing, but they are necessary to complete this game. This game can take a few hours, or it can take a long time, depending on how well you know these types of games. The graphics are great, considering that they were hand drawn.

In this game, you are Robert Foster, a man who lived in a place called The Gap, which is considered by people in the city to be a place for mutants and such. He gets taken to Union city by security forces, but the helicopter he was in crashed, and he had to run for his life. Now he has to figure out how to get back, who a man called "Overmann". There are a few twists in this game, which help keep you interested, not that you wouldn't be interested without them, they just give the game more of a story.

I had never really played too many games like this, where you have to actually pay really close attention, so you can figure things out, but it was really fun. You also have a sort-of sidekick named Joey, and his dialogue can be pretty funny.

There are characters in this game that can be amusing/ entertaining. There is a doctor who always is using anaesthetics on himself, then operating on a patient. There is an insurance agent who may remind some of Stan from Monkey Island. One character, Mrs. Piermont, has this dog, which in one scene, you get to do something that makes the dog fall in a pond, which is great.

At one point in this story, it gets pretty dark, not dark like the opposite of light, but dark as in the mood of the story. You find a dead body of someone that you meet early in the story, I won't tell who, but then it just gets darker from there. Not in a bad way, though. It actually makes it even more interesting.

If you are a fan of these sort of adventure games, or a fan of games in general, then you need to get this game. You will most likely love it, and since it is free, even if you don't like it, that doesn't matter since you didn't have to pay for it. I loved this game, and think it is great. Different than most games I play, but still very fun. 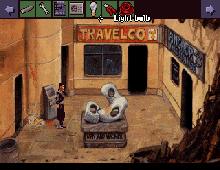 Beneath a Steel Sky screenshot

People who downloaded this game have also downloaded:
Gobliiins, Azrael's Tear, It Came from the Desert, Maniac Mansion Deluxe, Apprentice