It Came from the Desert

One of the real classics and from one of the best game companies that have ever existed. Correct, I'm talking about Cinemaware here. The game starts with some strange things happening and you will soon discover that you are up against a lot more than you expect first. It turns out that the small town you are living in is being attached by giant ants and you are pretty much the only one that can stop them.

There are numerous in-game events including fighting the ants with a gun, bombs, with a plane and even with a tank. Other events such as knife fighting, car racing and the event that you will most likely see most which is when you have to escape from the hospital. The entire game is limited within a certain amount of time so you shouldn't use too much time wandering around or sleeping too much (this is needed though). This is also why you get the chance to escape from the hospital so you don't waste time there. Let me state that escaping from there is quite difficult but very exciting though.

The story line in the game is what makes it great. It isn't very often that an action adventure game is offering such a great story and even though there isn't that many options there are still several ways that you can complete the game even if it means that you don't win completely. The graphics are well done compared to the release date and the entire interface is quite smooth although there are a few glitches here and there. But overall It Came From The Desert is an excellent game and in my opinion not many other games have offered anything near regarding a story and overall game play.

Playing It came from the Desert puts your right into a B-Movie. The programmers of Cinemaware did a great job in creating the atmosphere of those typical horror/sci-fi-films of the 50s. The situation at the beginning: a meteor came down in the surroundings of Lizard Breath, a small dull village somewhere in middle america (I guess...). The radioactive fallout caused the local ants to mutate into horrible creatures. Up to now you are the only one who's ever seen them.

You only got 2 weeks to stop the invasion of the ants and the game is in realtime - one second in real time exceeds about one minute in the game. That's not too much, you got to hurry up a bit. Plan your moves on the map and find out enough to prove that the danger is real. Sometimes there are some little action-sequences e.g. when you have to fight some ants - you better take that serious or you might lose some days lying in hospital! You also got to remember that you won't be able to talk to everyone at every time of the day. If you drive to the mayor's house at night - well... you drove in vain, that time is lost. Pretty realistic (if you can use that term while talking about a B-movie ;) ). The game itself is not TOO difficult, but it's a nice thing I recommend to everyone just because of the atmosphere.

Unfortunately the graphics of the PC-version aren't too good, although the game supports VGA you only get 16 colors - too bad. I remember playing this on my Amiga years ago - you find it in "Amiga" section of our site, the graphics of that version double the fun of the game!

Undoubtedly inspired by dozens of 1950s "B" movies, especially the 1954 mutant-ant classic "Them!", It Came From The Desert is one of Cinemaware's finest creations that will challenge both your brain and your brawn.

As the town's resident geologist, your goal is to discover the source of all the strange occurances happening in Lizard Breath. Gameplay centers around choosing what you want to do by selecting an option on the multiple choice screens that pop up. There are several buildings in town, as well as farms, mines, an airport, and even a drive-in theatre. Since time ticks away quickly at one minute per second of real time, quick decision is key to success.

Once your investigation begins, you soon realize there are large, mutant ants roaming around the outskirts of town. These ants are dangerous, and you must fight them to survive with a handgun, an apparently infinite amount of grenades, and bug spray used in airborne attack. Knowledge of the movie "Them!" will help you kill the ants, but if you haven't seen the movie, don't despair -- you get hints when talking to the townsfolk.

While play might seem limited at first, there are dozens (possibly hundreds) of variations in the game, depending on the choices you make. Not only that, but there are many opportunities to find yourself in a fight, either with the ants, or with some of the not-so-friendly folk of Lizard Breath. You can wind up in a knife fight, or being chased across the desert by several hundred giant ants, or even playing chicken on the highway with the local greaser punks. With great graphics, rocking soundtrack, and tons of atmosphere, this is a must play for all action/adventure fans. Recommended! And better yet, Cinemaware has released the game as freeware in 2001, so go support one of the most underrated developers today :) 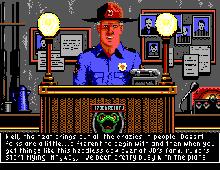 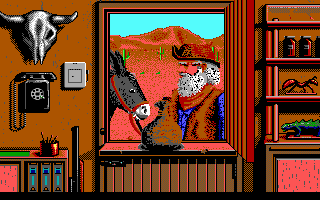 It Came from the Desert screenshots